The Australian Industry Group just released January’s Performance of Services Index (PSI) which showed a sharp drop in the closely watched metric. The Australian PSI collapsed 7.8 points from 52.1 to 44.3 and puts the sector in contraction territory.

January’s PSI reading dropped to the lowest level since November 2014 and follows a slew of lackluster economic data reported out of the Asia-Pacific region. The area has been adversely impacted by the ongoing US-China trade war considering the Australian economy is closely dependent on the Chinese.

The alarming PSI data announcement followed Australia’s dreadful inflation and building approval numbers that came out yesterday – all of which widely missed survey expectations. Despite the weak economic data, the Australian Dollar has been holding up surprising well given the circumstances. 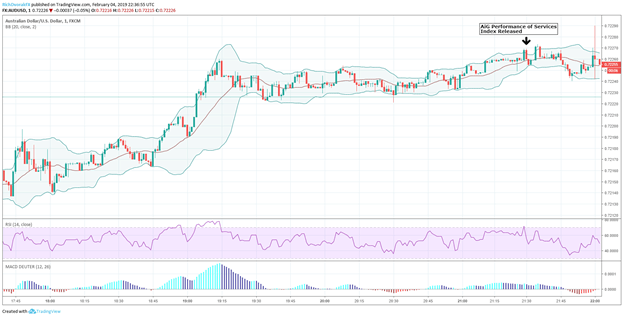 Most of the downside in the Forex pair witnessed today can be attributed to strength in the USD which has broadly rallied against the major currencies since the Federal Reserve’s FOMC meeting last week. As for the AUD, the currency could be holding up over the prospect of the Reserve Bank of Australia still raising interest rates since the lack of price movement immediately after the PSI release is exceptional.

AUDUSD traders may simply be waiting the RBA rate decision as well as upcoming 4Q retail sales and trade data before changing bias. Take a look at the DailyFX Economic Calendar to see upcoming data releases and other economic events.