Hopes for a trade settlement between China and the United States gave some Asia Pacific equity markets a degree of support Friday, despite some terrible manufacturing numbers out of China which underlined once again how important a deal now is.

Investors also looked toward key US employment date due for release later in the session. January’s nonfarm payrolls data are coming up after Asian bourses close with market expectations centered around a rise of 165,000 jobs and an unchanged unemployment rate of 3.9%.

US President Donald Trump told reporters on Thursday that he was hopeful for a deal with China before the March deadline. CNBC cited two sources in its story which claimed that Trump and his counterpart Chinese President Xi Jinping could meet in late February.

Countering this more hopeful looking scenario was the January Caixin Purchasing Managers Index survey of China’s manufacturing sector. It registered the steepest contraction since 2016, hard on the heels of an official snapshot which, although slightly better than expected, was still very weak.

The Nikkei remains in the uptrend dominant since late December on its daily charts.

However, resistance formed by the top of steep falls which began earlier this month is still a tough nut for bulls to crack, and they have been trying for a little while now. 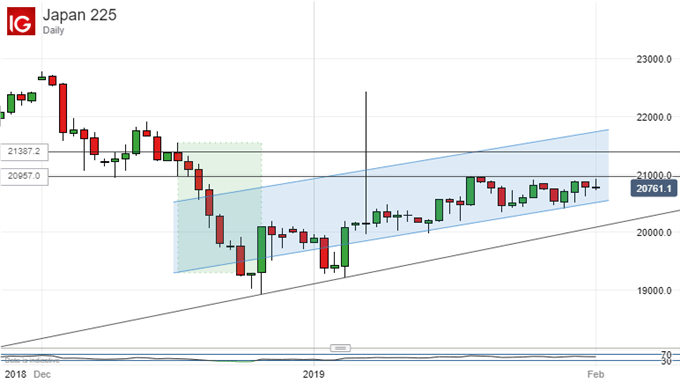 In the foreign exchange space, the Australian Dollar was hit by those Chinese numbers, while the Japanese Yen steadied. Overall risk appetite held up fairly well though. The US Dollar index tracks the currency against its major traded peers and was steady on the day.

Crude oil prices rose but remain caught between the competing impulses of trade hopes and clear signs of a Chinese slowdown. Gold prices look set to end the week on a high note, buoyed up by this week’s dovish Federal Reserve policy statement. The prospect of more cautious rate rises ahead offers relief to non-yielding assets such as gold by reducing the risk-free returns on US Treasuries.

Those US labor stats aside there are still plenty of economic data points to attract investor attention on Friday. The Eurozone’s Consumer Price Index is due as are various Purchasing Managers Indexes for manufacturing sectors in Europe and Canada and the US. The Institute for Supply Management’s US snapshot is also coming up, along with constructions pending levels and the University of Michigan’s consumer sentiment index.