After two years, an exit plan for the UK from the EU is as unclear as when the negotiations began. On Tuesday, MPs voted on amendments to Theresa May’s “Plan B” after her initial proposal was shot down in what was the biggest political rejection in the UK Parliament’s history.

A detailed explanation of each amendment can be found here.

Many of the amendments did not pass, including one that would have allowed for a second referendum. However, one that did survive rejected the UK leaving the EU without a deal. However, this is not legally binding, which means a no-deal outcome is still possible.

The other amendment that passed stipulated that “alternative arrangements” would be made for the Irish backstop. This is an insurance policy to ensure that in the event of a no-deal Brexit, there would be no hard border between Northern Ireland (a member of the UK) and the Republic of Ireland (a member of the EU). Regular commuters would remain uninhibited, and goods would continue to cross the border.

After the debate in the House of Commons, the EU Parliament debated the recent amendments and proposals. However, notable EU officials have reiterated their position with clarity: a re-negotiation of the Brexit deal is not on the table, and the backstop policy will not be subject to change.

Some of these officials include EU Commission President Jean Claude-Junker, French President Emmanuel Macron, and President of the European Council Donald Tusk and EU Chief Negotiator for Brexit Michael Barnier. The latter said the backstop is “part and parcel” of the EU’s Brexit deal and will not be renegotiated.

While both sides have claimed they want to avoid a no-deal scenario, the divorce appears to be heading in that direction. The EU Parliament debated the issue, and the outcome appears to be a stalemate, with both sides digging their heels in and accusing the other’s rigidity for a no-deal outcome dangerously close to reality.

The EU Parliament debate displayed the MEP’s disdain and frustration with the UK’s apparent disorderliness. “The least we could do is respect the person who has the microphone…please listen, this is far too serious an issue to play out like in the [UK] parliament. This is not the House of Commons, this is the European Parliament” said the Deputy Speaker.

In his speech, Junker claimed that the lack of order in the UK legislature made negotiations difficult, and what Theresa May’s government wants is unclear. The issue is arguably straight-forward: a majority of Brexiteer MPs do not want the backstop, fearing that it may leave the UK indefinitely tied to the EU.

If the EU refuses to re-negotiate a new deal, and the UK will not budge on the backstop – the primary issue of the debate – makes a no-deal Brexit look increasingly more probable.

The Pound certainly felt the pain of the debates on the amendments on the 29th. GBP/USD closed lower that day, shortly after the pair tested the resistance at 1.3199 but did not find adequate underlying momentum to push through. Traders are probably not very optimistic about the Pound’s upside potential given the current state of negotiations. 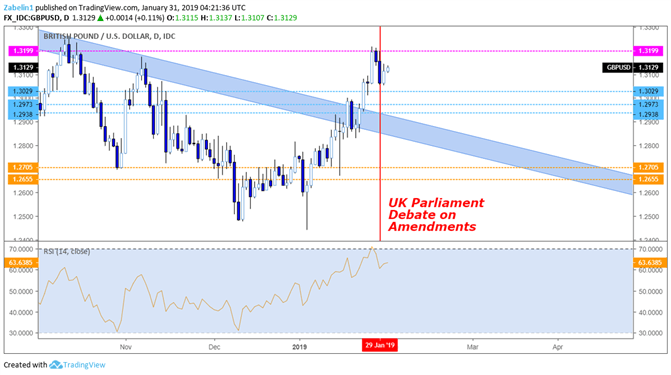 The magnitude of the currency’s movement will be difficult to place given that with every passing day, any developments translate into greater price swings as investors try to see where the wind blows. Specifically, is the UK drifting toward or away from Europe? For the time being, it looks as if it is drifting away. But one thing remains clear: there will certainly be uncertainty.