- Today marks the first non-quarterly meeting that will feature a regularly scheduled press conference by the Fed Chair.

- The Fed’s policy statement made clear that it is going to be patient and see how data evolves before it makes judgements over the impact of the US government shutdown.

The Federal Open Market Committee left the interest rate range unchanged at 2.25% - 2.50% at Wednesday’s meeting, to no one’s surprise. The first rate decision of 2019 is also the first regularly scheduled, non-quarterly meeting to be accompanied by a press conference – an effort towards Fed Chair Jerome Powell’s initiative to provide clarity regarding the central bank’s thought process. While the interest rate hold was expected – rates markets were pricing in a 0% chance of a hike today - a language change in the report provided the spark for earnest price action.

Included with the announcement was the Fed’s decision to drop certain key language from their report. In what plainly appears to be a dovish shift, Fed officials removed reference to “further gradual rate increases.” Further, the committee pledged a “patient stance” on future moves. The dovish language drove the US Dollar (reflected by the DXY Dollar Basket) below 95.50 from the 95.95 area before the release. 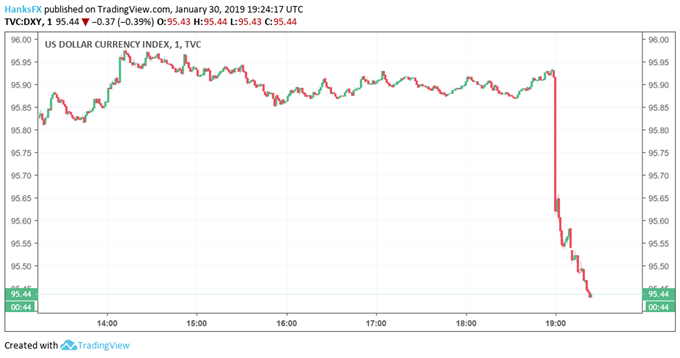 At the press conference, Powell bolstered the Fed’s dovish stance. After noting slower growth in China and Europe, Chairman Powell maintained that the case for raising rates had weakened and “common sense risk management suggests waiting for greater clarity.” He also noted the global slowdown has been reflected in incoming data and went on to reaffirm the central banks data dependency.

Furthermore, Chairman Powell commented on the status of the Fed’s balance sheet. “Balance sheet size is to be driven by reserve demand plus a buffer.” He continued, “reserve holdings are important for financial institutions” and concluded by affirming that the bank would not use the balance sheet as an active tool, but the committee would discuss its composition in the coming meetings.

Elsewhere he highlighted the impact of the recent government shutdown on GDP and the Fed’s policy. The Chairman admitted the shutdown would leave an imprint on Q1 GDP but asserted the impact would be recouped in the second quarter. The White House estimated each week of a shutdown would sap 0.13% from GDP.

Brexit Timeline and its Impact on Global Markets

As for matters across the pond, Chairman Powell commented on the ongoing Brexit debacle. “We’ve monitored Brexit for a long time and a hard Brexit would likely be felt in the United States. We are hoping for a resolution that avoids a hard Brexit” the Chairman said.

As the press conference drew to a close, the Chairman also offered commentary on the Federal budget. “It is no secret the budget is on an unsustainable path and is something that needs to be addressed.” While he noted the central banks concern over the matter, officials find the budget deficit to be a long-term risk more than a short-term threat. 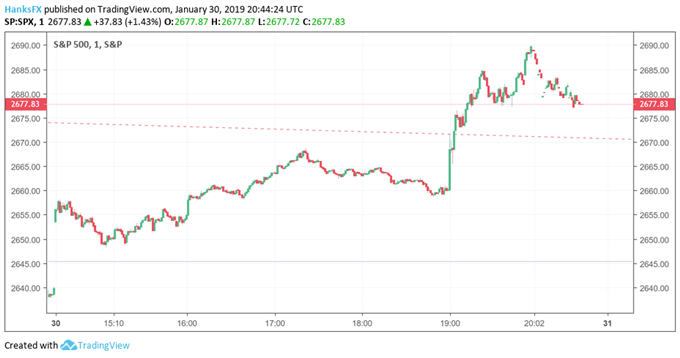 As the Dollar declined, Chairman Powell’s dovish confirmation on the Fed’s policy and pace of future hikes caused equity markets to soar. The S&P 500 climbed higher to nearly 2700, topping out around 2690 before retracing to the 2677 range approaching the close.