A day after iPhone-maker Apple reported earnings FANG member Facebook and the largest company by market cap, Microsoft, reported their quarterly findings. Online retailer Alibaba also reported earnings Wednesday and offered a strong performance, despite widespread concern of an economic slowdown in China. Together the performances should provide some buoyancy for tomorrow’s equity trading session as investors look to the next big earnings report, Amazon.

Mark Zuckerberg’s Facebook traded 8% higher in after-hours following the announcement of the company’s Q4 earnings. Revenue surprised with $16.91 billion versus the $16.39 billion expected. Similarly, earnings per share read in at $2.38, notably higher than the expected $2.18. Despite a rough quarter for FB, EPS was considerably higher than in Q3 when it read $1.76.

In another win for the social media company, monthly active users impressed analysts. In Q4 alone, 2.38 billion users accessed the site per month, a 9% increase from Q4 2017 when 2.13 billion users visited the site every month. The metric is seen as one of the most important as it is a key data point in forecasting revenue and growth figures. The robust active user numbers should help to ease some concerns over the company’s revenue streams in future quarters. Still, the year-over-year percentage increase in monthly active users is the smallest in the last 10 years.

Conversely, Microsoft announced a minor miss after the close. Revenue met expectations at $32.5 billion but EPS read slightly lower than analysts had forecasted at $1.08 versus $1.09. While marginal, the miss was enough to send shares slightly lower in after-hours. Still, the share price is strong enough to maintain the world’s largest market capitalization heading into tomorrow’s session.

While the results may have been somewhat underwhelming based on the numbers, the broader context and sentiment seem to have lowered the bar. Alibaba’s share price has suffered in recent weeks, off more than 21% from its all-time high as concerns on the US-China trade war and an economic slowdown in China weigh. That said, shares traded roughly 6% higher following the data release. The rally was likely exacerbated by Fed Chairman Powell’s dovish commentary later in the trading session, but substantial gains were established before the rate decision was announced.

A Brief History of Trade Wars, Insight into the US-China Trade War

Despite the admirable quarterly performance and positive reaction in share price, Alibaba still faces headwinds. Revenue slowed for the third consecutive quarter, growing at 41% from a year prior. In the previous two quarters, year-over-year growth measured 65% and 76% respectively. While the exact ramifications of the US-China trade war and China’s slowdown are hard to calculate, the fundamental themes should continue to weigh on Alibaba until they are resolved. 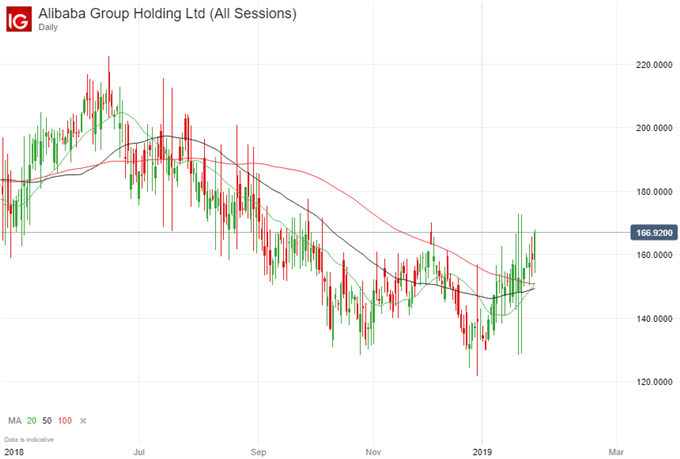 Another key earnings report will cross the wires tomorrow with Amazon due to report after the close. The online retailer is currently the world’s second largest company by market capitalization and could leapfrog Microsoft on a positive result. Follow @PeterHanksFX on Twitter for live updates and analysis of earnings reports, as well as links to future earnings articles including Amazon.