AUD/USD, along with yields on 10-year Australian government bonds surged after year-on-year CPI came in better than expected. Forecasts were at 1.7 percent with the actual coming in at 1.8 percent. The Aussie jumped approximately 0.40 percent and broke the pre-release congestion as traders anxiously waited to see the results. 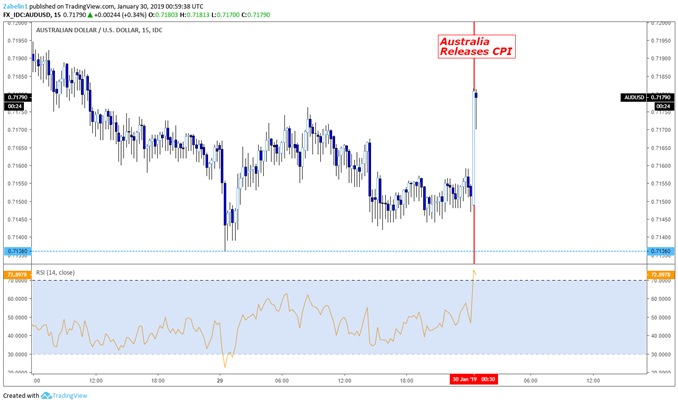 This is not likely to have a significant impact on the RBA’s monetary policy. The year-on-year underlying inflation measure forecast stood at 1.8 percent with data coming in at the same number. This indicates that core price movement remains broadly in line with expectations. Markets are currently pricing in a 63 percent chance of no change in the central bank’s dovish approach with a probability of a cut outweighing a hike.

Australia still faces many potential headwinds in 2019. The trade war dispute between China and the US has still not been resolved, and slower growth in China – and greater risk to the economy – has been weighing on the Aussie.

Looking ahead, AUD/USD traders will be closely monitoring trade talks this week between Chinese Vice Premier Liu He and US Trade Representative Robert Lighthizer. Markets will also be looking at the release of China’s Manufacturing PMI and Caixin index in order to gauge the strength of the economy and how it may affect the Australian economy.