Brazilian Real May Fall on Inflation Data - Will Conditions Improve?

The Brazilian Real may fall on Tuesday when the country’s year-on-year FGV Inflation data is released at 17:00 GMT. Expectations stand at 0.00 percent with the previous at -1.08 percent. The data may fall just short of forecasts and stay narrowly within negative territory. This would fall in line with a broader trend many of the country’s indicators have been showing.

Economic data has generally been falling short of forecasts except for consumer confidence, foreign direct investment (FDI) and other indicators that measure the sentiment regarding the future of Brazil. The fact that much of the leading and coincident indicators are improving is telling. It could be viewed as a signal that investors are feeling bullish on Brazilian assets.

The Ibovespa – Brazil’s benchmark equity index – climbed to its highest point in its existence on January 24, closing at 97677.20. The Real is also being eyed by investors who are eagerly awaiting President Jair Bolsonaro’s much-anticipated reforms that many think will boost the economy. He further expounded his economic agenda and opening up Brazil more to the global economy at the World Economic Forum. 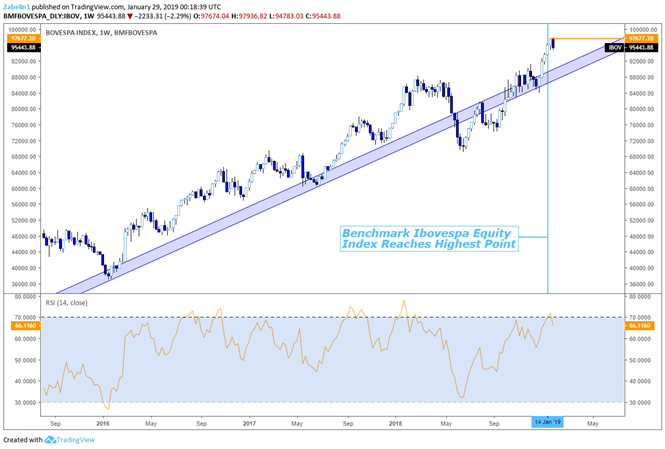 Meanwhile, USD/BRL has been drifting away from the edge of what was appearing to a bearish reversal. After almost touching a key support at 3.6654, the pair is now idling between 3.8140 and 3.7625. If the inflation data comes in better than expected, USD/BRL could move to closer to the key support line. 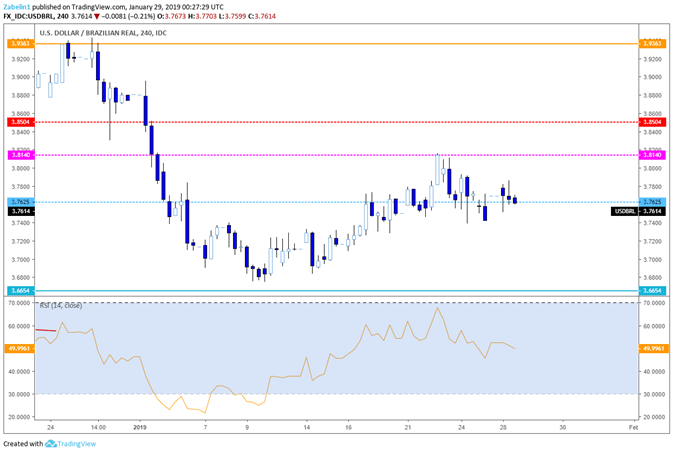 Much of the Real’s movement in 2019 will be dependent on Bolsonaro’s policies and are likely essential for the pair to complete its elusive reversal.

However, these policies will take time to implement. There may be many domestic and international headwinds that could blow the sales of the Brazilian economy away from the safe harbor of growth and into a coastline of stagnation. Only time will tell.