British Pound in Limbo as Brexit Vote Approaches - What’s Next?

As I outlined in my webinar, Brexit is an absolute mess. On January 29, the UK parliament will vote on amendments made to Prime Minister Theresa May’s “Plan B” Brexit plan. This comes after a historic rejection earlier this month of her initial proposal.

Several amendments have been proposed by Members of Parliament (MP’s) that have support from both sides of the aisle. An example of this is Amendment I, which rules out the possibility of a no-deal Brexit. If it passes, the British Pound may rise. As it stands, this proposal has the most support, with 129 MP’s signatures behind it.

The second most popular proposal is Amendment B, which has been signed by 103 MP’s. The revision would essentially temporarily shift the power of setting the agenda for Brexit to parliament and away from the government. This would be – yet another – groundbreaking moment in British parliamentary history as it would uproot a system that has been a place for over one hundred years.

With 78 MP’s backing it, Amendment J is a proposal put forth by members of the Conservative Party and Liberal Democrats. It demands that the government puts in a request to extend the Article 50 deadline if a deal has not been approved by February 26. The original deadline for Brexit is on Mach 29.

Here are some other notable amendments that are being tabled:

Amendment A – Proposed by Opposition leader Jeremy Corbyn. Calls for MP’s to consider options to stop the UK divorce without a deal. These include a permanent customs union with the EU and/or holding a second referendum.

Amendment C – Proposed by Liberal Democrats. It demands the government to rule out a no-deal outcome and for the preparation for a second referendum.

Amendment E – Proposed by Andrew Murrison of the Conservative Party. It calls for the UK’s divorce with the EU be altered with the addition of an end-date to the Irish back-stop on December 31, 2021.

The primary sticking point for reaching a deal has been the Irish Backstop issue. Brexiteer hardliners do not want the backstop because they are worried that such an arrangement would keep the UK tied to the EU customs union indefinitely. This would in turn undermine the hopes and aspirations for voters and policymakers who wanted economic and political sovereignty.

The British Pound may remain steady until the vote on January 29 as traders hold their breath waiting for announcements on which amendments survived and/or were voted down. For the time being, GBP/USD appears to have hit a familiar roof at 1.3199 and may not substantially deviate from this point in any direction until more is known. 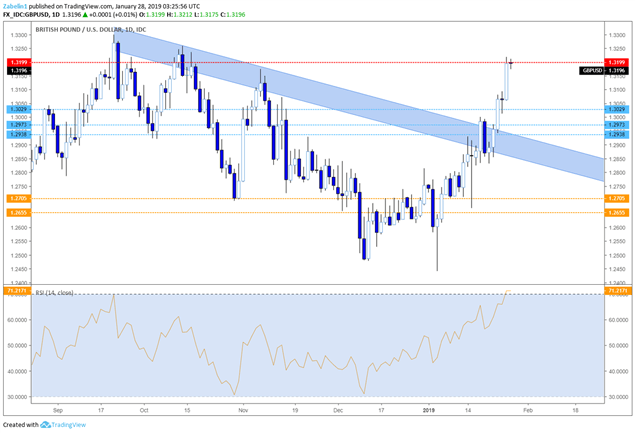