The Norwegian Krone and Swedish Krona may fall after each country’s respective unemployment data is released on Thursday. Economic data from both countries have been broadly trending lower for a little over a year.

The Swedish Krona may have a small dip following the release of Sweden’s Unemployment Rate. Forecasts currently stand at 5.8 percent with a previous report coming at 5.5 percent. If the data falls short of expectations – though not likely by a substantial margin – USD/SEK may touch what may be short-term resistance at 9.0327. Conversely, if data outperforms, it could fall through 9.0086. 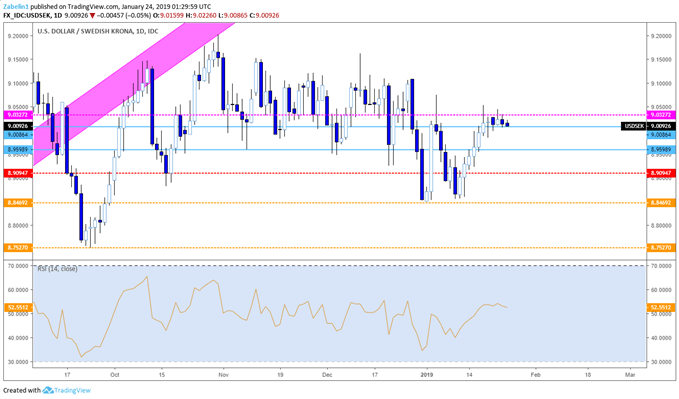 The unemployment rate has been steadily declining since 2014, but potential 2019 headwinds may reverse this trend and throw a wrench in the Riksbank’s monetary policy.

Deputy Governor Per Jansson in a statement on January 21 expressed concern for risks abroad and dissatisfaction with the central bank’s decision to raise rates in December – for the first time in seven years. He claims that while CPIF is above target, the underlying momentum was largely driven by energy. If true, this would be concerning because it would suggest that economic activity – minus the erratic price movements linked with energy – is weaker than expected, making the Swedish economy more vulnerable.

Sweden’s benchmark OMX equity index will likely suffer amid projected forecasts of slower growth in 2019 as outlined in the IMF’s updated outlook. The World Bank also released a report forecasting “storm clouds” on the horizon. Since October, the index has lost over ten percent of its value and has closed lower for three consecutive days after failing to close above 1499. 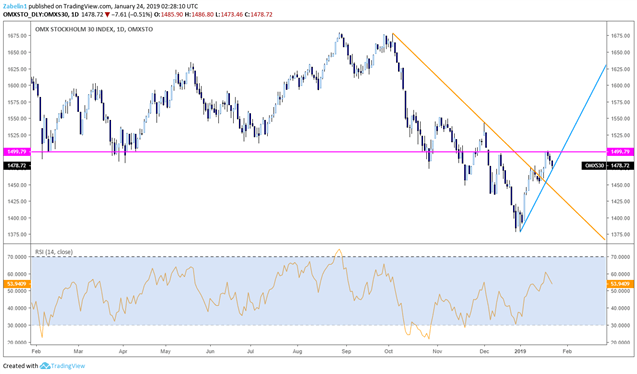 The central bank released its December meeting minutes recently, where policymakers expressed in greater detail their outlook for 2019 and the mounting downside risk. Political risk – while temporarily defused – will likely play a much bigger role in the Swedish Krona’s movement in 2019. This in large part has to do with the EU’s increasing political fragmentation and Sweden’s own domestic tribulations.

The Norwegian Krone may fall on the upcoming employment data. Expectations are set at 4.0 percent with the previous report showing the same number. Since early January, economic news flow in Norway has been outperforming relative to forecasts according to the Citi Economic Surprise Index. However, the broader downward trend from 2017 appears to remain in place.

In the long run, unemployment may rise or remain stagnant at best, as the Nordic countries – and most of Europe – begin to slow down. NOK may hold steady when the data is released and could continue trading between 8.5947-8.5586, potentially reaching 8.5451. 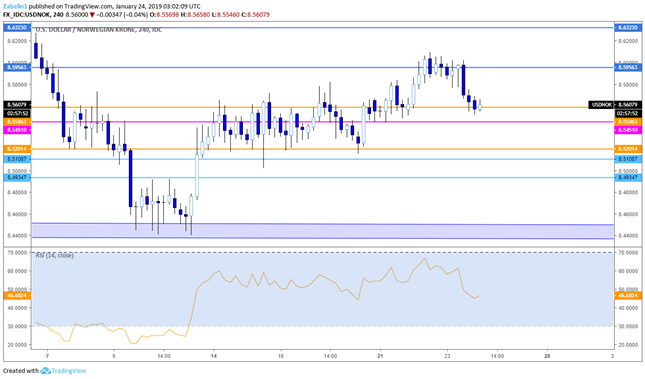 The Norges Bank – Norway’s central bank – also decided on the same day to keep interest rates at 0.75 percent. Officials stated that the next probable rate hike will be in March. However, forecasts of slower growth may put the central bank’s hike on hold until economic conditions improve. It is also possible officials wanted to squeeze in a rate hike before the turmoil so there would be more room to cut rates.

This would put Norway’s petroleum and export-based economy at risk in a climate of risk aversion. While globally, the country provides just a mere 2 percent of crude oil, it is the third largest exporter of natural gas and provides a quarter of the EU’s gas. The sector contributes 12 percent to Norway’s GDP and composes 37 percent of all exports.

It is therefore not surprising that in October – when crude oil prices plunged – the OBX equity index followed accordingly. Since late September, the index has shaved off 11 percent of its value, with the lowest in December when it was down over 17 percent. NOK, along with the Canadian Dollar and other oil-sensitive currencies substantially fell as well. 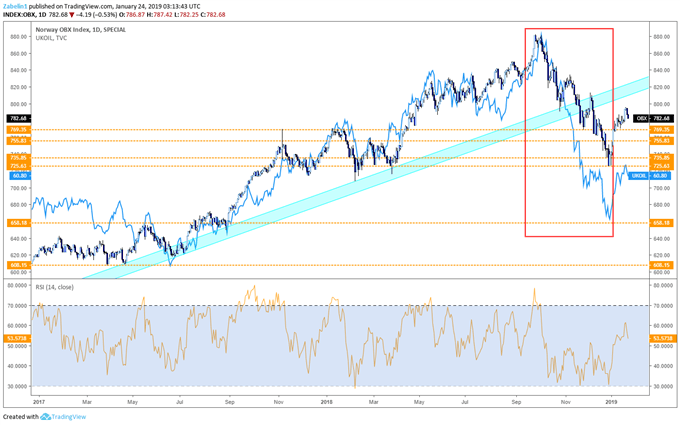 Slower growth in Europe – as the ECB demonstrated when it cut its inflation forecast from 1.7 to 1.6 percent – will adversely affect Norway’s economy. Geopolitical risks from Brexit and the Italian budget crisis have negatively impacted the outlook and brewed uncertainty. This primarily is attributed to the unique political economy of EU-Nordic relations. In 2019, the connection between the two will likely be demonstrated as the continent faces political and economic perils.