The Brazilian Real may rise tomorrow as the central bank prepares to release the month-on-month IGBE Inflation IPCA-15 report. The forecast is pegged at 0.35 percent with a dismally low previous report at -0.16 percent. Economic data coming out of Brazil for the third quarter generally underperformed relative to forecasts. However, reports since January have been broadly exceeding expectations.

If the data comes in better than expected, it is possible USD/BRL may inch downward towards 3.7625, reversing the almost-week-long uptrend. Earlier this month, the pair looked like it was on the edge of what appears to be a bearish reversal pattern. USD/BRL appears to be encountering resistance now at 3.8140, with another potential roadblock at 3.8504. 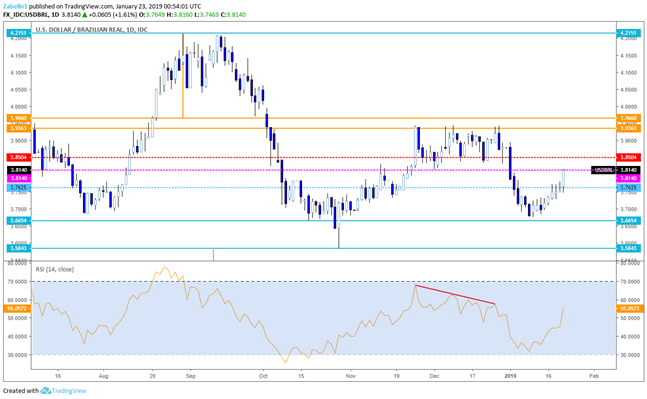 At the World Economic Forum (WEF) in Davos, Switzerland, Brazilian President Jair Bolsonaro delivered the key note address and spoke about his administration’s “major commitment” to opening Brazil for trade. Other elements of his economic agenda include proposals for simplifying the tax system, reducing the size of government and – most importantly – reforming the country’s bloated pension system.

The latter proposal has been a major reason why investors have begun to eye Brazil favorably. It is reported Bolsonaro will settle on a pension system framework by the time he returns from Davos and will present his overall economic agenda to the National Congress by the end of the month. The optimism over Bolsonaro’s reforms has led the Ibovespa equity index to reach its highest point in its existence, closing at 96096.75. 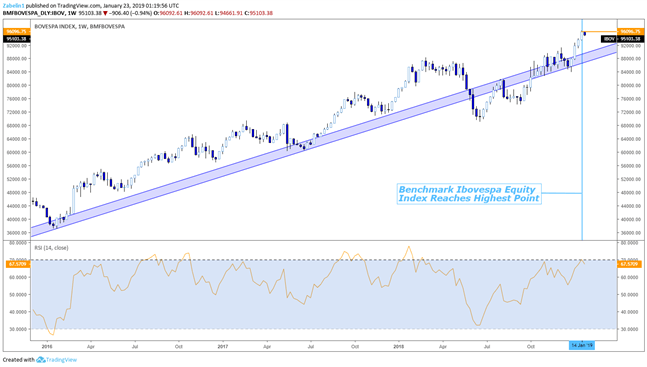 Looking ahead, if Bolsonaro can pass his reforms through Congress, the Brazilian Real could be the best performing emerging market currency in 2019.