The broader stock market may take its cues from Netflix tomorrow after an admirable performance from the FANG member. The company reported fourth quarter earnings after the close Thursday but subsequently slumped as figures narrowly missed expectations. The company’s recent announcement to increase membership fees bolstered many analyst’s expectations for the coming quarter and contributed to an overall weekly gain of roughly 5.5% at the close Thursday. 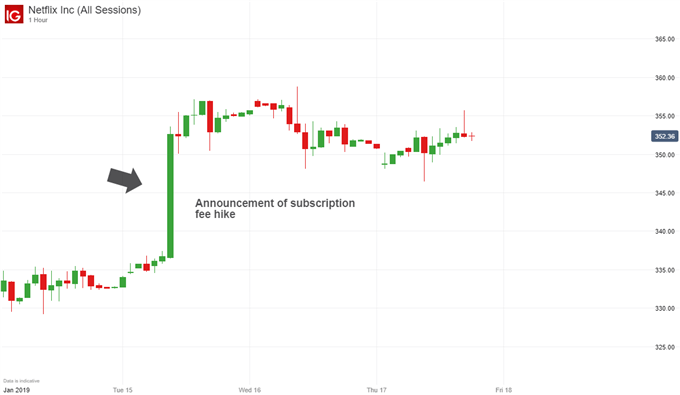 The quarterly report highlighted strong revenue and earnings per share (EPS). EPS in the fourth quarter beat out analyst expectations, reading in at $0.30 compared to the $0.24 expected. Revenue missed slightly, $4.19 billion versus $4.21 billion expected. Similarly, Q1 2019 forecasts were roughly on-target.

As Netflix’s lion share of revenue, subscription fees are crucial to the firm’s profitability. The streaming service added 8.84 million new subscribers in Q4 2019 but missed guidance of 9.4 million. Q1 2019 subscriber growth forecasts similarly missed, 7.3 million versus 7.31 million. While the recent price-hike may bolster revenue, it could also begin to weigh on subscriber growth as the age-old laws of supply and demand still apply.

After the announcement, Netflix shares slumped 5% to the $335 range. During the earnings call, shares rebounded slightly and were off about 3% as markets digested the news. The narrow earnings miss from a widely watched stock should contribute to overall equity sentiment tomorrow.

Despite shares trading lower, the reaction is relatively minor given the volatility in Netflix’s share price around earnings. Previous quarterly reports have seen Netflix crater more than 15% lower or soar more than 15% higher. 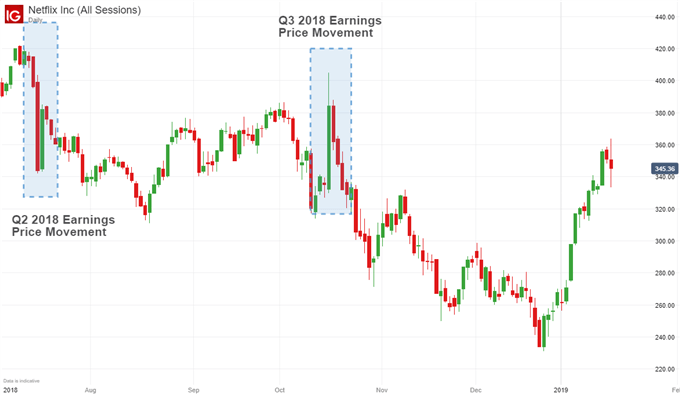 The lack of volatility on the earnings miss may be rectified tomorrow which could prove bearish for the S&P 500 if analysts believe the miss to be worse than after-hours action suggested. Regardless, the benchmark index has rebounded significantly from its low on December 24th and looks to continue the journey higher even as global growth concerns loom.