Most Asia Pacific benchmark stock indexes traded cautiously higher following gains on Wall Street amidst rosy earnings reports from major banks such as Goldman Sachs. However, markets were not universally optimistic during the morning session. Japan’s Nikkei 225 traded about 0.15% lower after the index experienced a sharp decline earlier in the day.

This might have reflected concerns after the US pursued criminal charges against Chinese telecom giant Huawei which might have set the S&P 500 up for a reversal to come. The Nikkei 225 attempted to trim losses within the day but ended up heading lower. Meanwhile the ASX 200 and Shanghai Composite traded roughly 0.27% and 0.46% higher. The former is attempting to complete a bullish reversal pattern on the chart below. 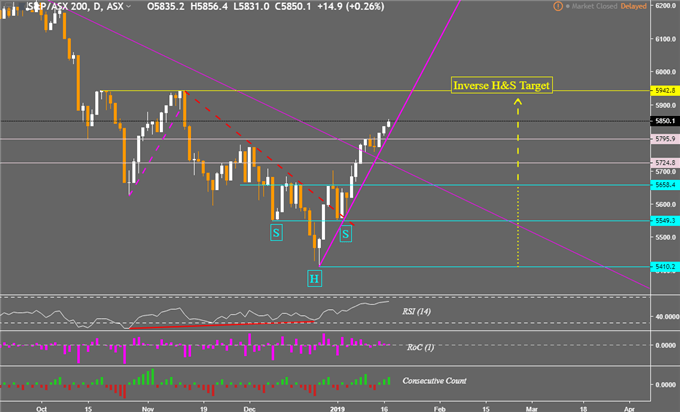 Moreover, S&P 500 futures are pointing lower which suggests that a ‘risk off’ trading dynamic might prevail in the European and US sessions ahead. Fundamentally, the US economy is overshadowed by ongoing partial government shutdown which is projected to detract about 0.13 percentage points in quarterly GDP each week.

The Nikkei 225 has struggled to make further upside progress after closing above the descending trend line from December 2018. This is a great reminder of how important confirmation is in technical analysis. Prices are sitting right on top of support at 20,347 which is the March 2018 low. Near-term resistance is a horizontal range in-between 20,950 and 21,035. 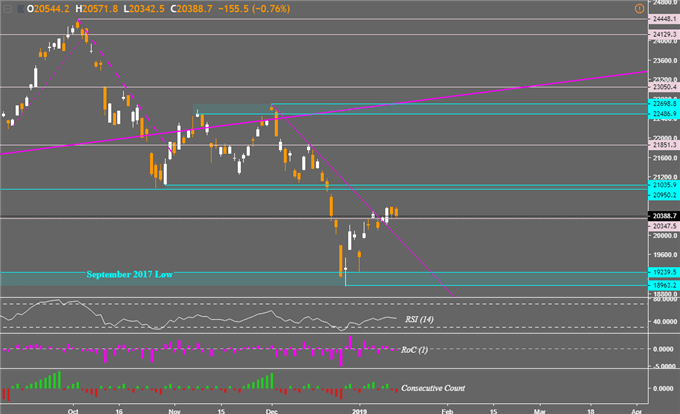