GBP/USD to Fall on Likely Brexit Deal Rejection - What’s Next?

On Tuesday night, the UK Parliament will vote on Prime Minister Theresa May’s Brexit deal. The proposal has drawn much criticism from both sides of the aisle and is likely to be rejected. Since the UK voted to leave the EU, the British pound has shaved off 13% of its value against the US Dollar as investors and policy makers attempt to figure out where negotiations are headed.

As I disclosed in my webinar, Brexit is an absolute mess.

WHAT HAPPENS IF THE BREXIT VOTE IS REJECTED?

If May’s deal is rejected in parliament, she will have to submit a so-called “Plan B” within three days. There is also, the possibility – although the legality is still being debated – that parliament could theoretically seize the process from the government and delegate to a council of senior lawmakers. This kind of unprecedented political move amid the chaos that is already underway would likely only exacerbate volatility in the British Pound.

Since May survived a vote of no confidence in December, British law dictates that she cannot be challenged as PM for a year from within her own party. However, she is not protected from a vote of no confidence that Jeremy Corbyn – head of the Labour Party and leader of the Opposition – is considering initiating if the deal is rejected. If the majority of MP’s vote against the PM’s government, the Labour Party would be allocated two weeks to gather sufficient support to acquire a majority in parliament without triggering another election.

However, if Corbyn fails to obtain a majority and form a new government, an election will be activated and will likely exacerbate the complications of the already tumultuous affair.

There is also the possibility that the UK may extend Article 50, a law that grants the right of any EU member state to exit the Union within a two-year period. However, an extension could only be granted if the European Council unanimously agrees to it, and currently the EU heads of state are opposed to the idea.The timing would also be difficult considering the upcoming EU parliamentary elections in the spring.

Another possible outcome – though not very likely – is a second referendum can be held to allow voters another chance to either reverse or affirm their decision to divorce from the EU in 2016. Regardless of the outcome, most policy makers agree that a no-deal Brexit should be avoided at all costs. The economic and political impacts are almost unfathomable. The British Pound in this scenario would almost certainly drop more than it did in 2016. 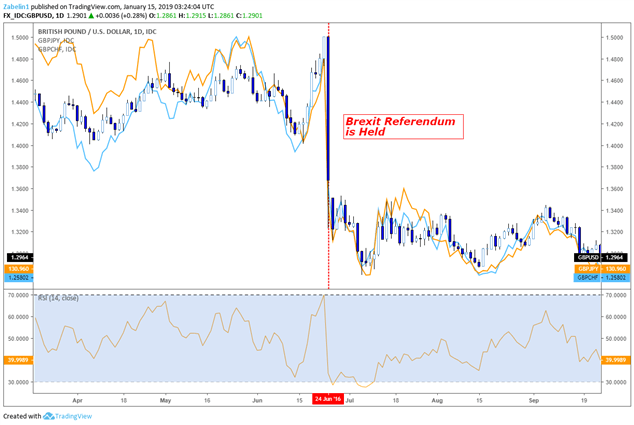 The potential social unrest is also of great concern. Defense Secretary Gavin Williamson spoke to MP’s and informed them that military personnel would be available to quell any unrest in the event of a no-deal outcome. Such an intervention and sign of instability will likely fuel the capital flight away from GBP.

HOW WILL THE BRITISH POUND REACT TO BREXIT VOTE?

Traders with exposure to the British Pound are holding their breath awaiting the decision from parliament. Leading up the vote, unless there are breaking headlines beforehand, the Pound may not have any significant moves until after the decision is announced.

GBP/USD since mid-late September has not been able to break above the resistance range despite efforts in October, November and now January. It is not likely the pair will be reaching 1.2938 or breaking above the resistance given the uncertainty surrounding the plurality of outcomes from this vote. It is more likely that we see the pair testing 1.2705-1.2655. 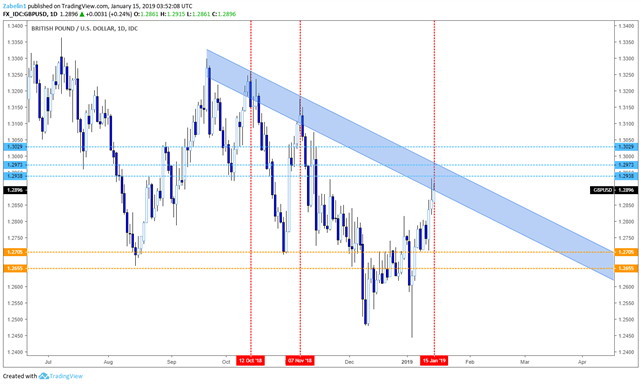 Forecasting for this particular event is difficult, however, due to the magnitude of the decision at hand and the various possibilities of where negotiations might go. Sentiment-linked assets like the New Zealand and Australian Dollar might fall if the decision is rejected – despite the anticipation. On the other side of the risk-spectrum, we might see an uptick in anti-risk assets like the Japanese Yen, Swiss France and US Dollar.