UK Prime Minister Theresa May’s proposed Brexit deal with the EU will almost certainly be voted down by the UK House of Commons – the elected house of Parliament – Tuesday evening but that will not necessarily be bad news for the British Pound.

The so-called “meaningful vote” will take place after 1900 GMT and could be some hours later because amendments have to be voted on first. The best guess is that it will take place between 2000 and 2100 GMT – in the quiet period for FX trading between the end of business in New York and the start in Asia.

That could mean substantial gyrations in GBPUSD but note that GBP one-month implied volatility remains well below the peaks reached in June 2016 when the British public voted in a referendum to leave the EU. 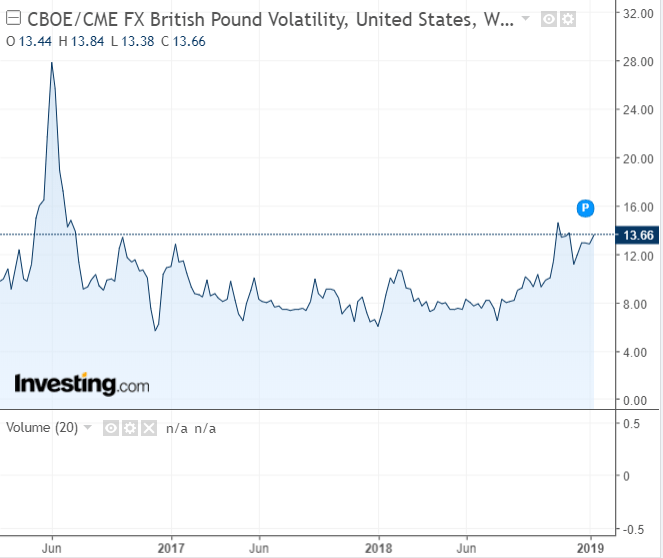 Source: Investing.com (You can click on it for a larger image)

The problem for GBP traders is that almost anything could happen after the vote, including the replacement of May as Prime Minister by her own Conservative Party, a general election, a second referendum, leaving the EU on March 29 without a deal or a postponement of that March deadline. That could mean only a limited response in Sterling.

As one opposition member of Parliament said Monday, perhaps we all might as well wait to see whether a mermaid riding a unicorn will happen by and provide a solution.

That means that in essence the vote could leave wide open the possibilities of positive or negative GBP outcomes so the currency could well continue the climb that started on December 12, driven up by the positive technical picture rather than by the fundamentals.