USD/BRL may dip upon the release of Brazil’s CPI data that will likely fall short of expectations. In December, the year-on-year inflation came in at 4.05, falling short of the 4.17 forecast, and underperforming the previous release at 4.56. Retail sales have also been taking a hit for the past few months with broader economic data showing weakness.

USD/BRL since January 25 to the time of writing has risen almost 20 percent, with the peak in September when the pair had risen over 30 percent. However, more recently the pair have formed what appears to be a long-term bearish reversal pattern that looks like it is on the edge of confirmation. 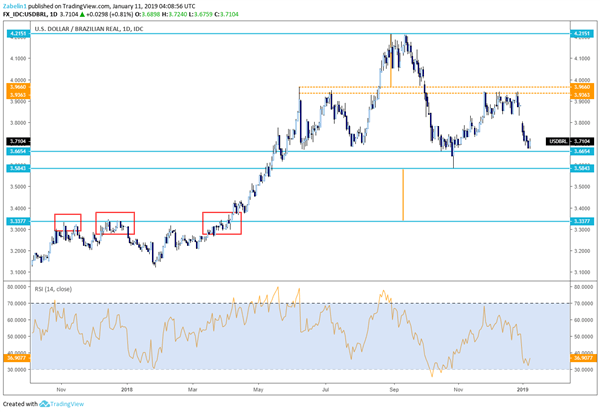 However, despite disappointing economic data, consumer confidence has been steadily rising. This in large part has to do with the politics in Brazil. Since June, it has increased 16 percent, reflecting hope that President Jair Bolsonaro will be able to deliver on his economic reforms that may make the Brazilian Real the best performing emerging market currency in 2019.

One of the major policy reforms includes deflating the bloated pension system that is crippling Brazil’s economy. Markets cheered Bolsonaro during the perilous election last October, and have been betting on him being able to deliver the necessary reforms to stabilize Brazil’s economy. If Bolsonaro wants to keep investors cheering for him, re-designing the pension system is a necessary policy measure he must deliver.