The Federal Reserve released its FOMC minutes from the December 18-19 policy meeting where the central bank raised its benchmark interest rate 25 basis points to a range of 2.25-2.50 percent. Since the decision, stocks and bonds have experienced a whirlwind of turmoil as investors gradually grow more pessimistic about the future. This has resulted in a massive selloff across asset classes as financial conditions tighten in response to a waning economic backdrop.

The downshift of America’s economic engine has resulted in the Federal Reserve updating its Summary of Economic Projections which lowered estimates for GDP, inflation, and the midpoint target for the federal funds rate. Additionally, the Fed has taken a more aggressive approach to communicating its commitment to data dependency as participants remain open to holding off on more rate hikes seeing that the Fed is not on a preset course.

This has been conveyed most powerfully by Fed Chairman Jerome Powell who last Friday reassured markets that the central bank has the back of investors should the financial situation turn sour. At an interview at the American Economic Association, Powell commented that the Fed can be “patient as we watch to see how the economy evolves” especially with the subdued readings of inflation witnessed.

Furthermore, this has been echoed by Federal Reserve Bank District Presidents Eric Rosengren and Raphael Bostic who both touched on the idea of the Fed listening to the financial market’s reaction to monetary policy tightening and current risks which have plagued investor risk sentiment. Most prominently, the discussion over the tapering of the Fed’s balance sheet is now on the table for discussion – a change that could pose a material shift to how markets anticipate the Fed’s conduct of monetary policy and path to normalization.

With the prospect of future rate hikes quickly vanishing from the minds of market participants with the dovish drumbeat growing louder, the USD has been depreciating accordingly. The Fed at one time projected up to four interest rate hikes for 2019, but now only forecasting closer to two while money markets on the otherhand are starting to price rate cuts for this year.

“Though financial conditions had tightened and Federal Open Market Committee global growth had moderated, members generally anticipated that growth would remain above trend and the labor market would remain strong.”

“Several participants expressed the view that it might be appropriate over upcoming meetings to remove forward guidance entirely and replace it with language emphasizing the data dependent nature of policy decisions.”

“The tightening in financial conditions so far did not appear to be restraining real activity, although a more persistent tightening would undoubtedly weigh on business and household spending.”

“Risks to the outlook appeared roughly balanced, although some noted that downside risks may have increased of late.” 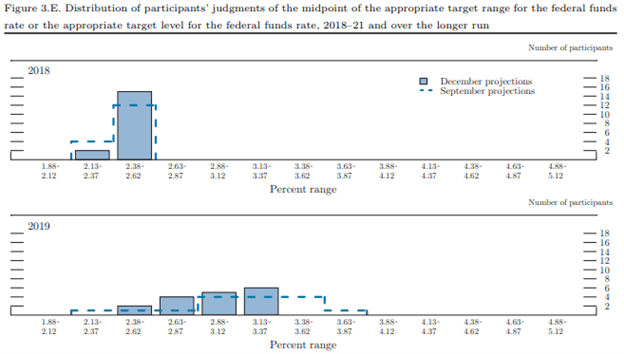