The Australian Dollar got a Friday bost from some Chinese economic data which managed not to disappoint the forecasters, a rare sight in recent months.

December’s service sector Purchasing Managers Index from media company Caixin came in at 53.9, above the 53.0 expected. Services put in another month of robust growth following a strong 53.8 gain in November. Added to the weak manufacturing PMI already released, that gave a composite read of 52.2, which is a five-month high.

This final release completes the December round of PMIs, an internationally comparable series in which a reading above 50 is required to show expansion in the sector under survey.

December’s manufacturing numbers had roiled markets with shock weakness. The official PMI showed the first contraction in China’s manufacturing sector since mid-2016. Caixin’s version was also below 50, for the first time since May, 2017.

The service sector certainly seems to have held up better. Still, overall the series has done little to dent market suspicions that China’s economy softened considerably in the second half of 2018. Much may now depend on how quickly a durable settlement can be reached in Beijing’s trade disputes with Washington. The economic numbers show how ill China can afford a protracted trade war at this point.

The Australian Dollar can often find itself in the role of the currency markets’ favored liquid proxy bet on Chinese economic performance. It seems to have done so on Friday, logging gains after those PMIs crossed the wires. 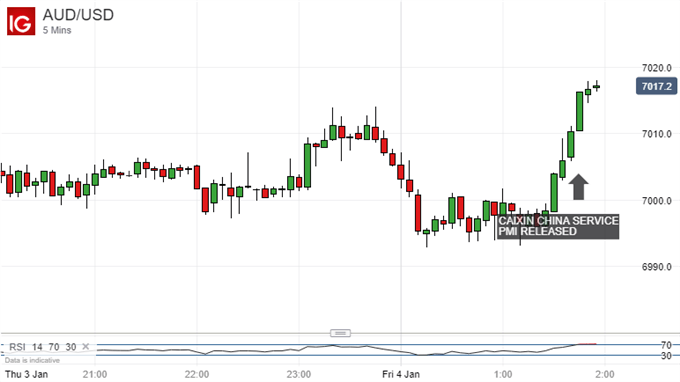 The rationale for this is straightforward enough given Australia’s vast raw material exports to China.

Indeed, worries about a Chinese slowdown have weighed on the Aussie and may well have been responsible for the extinguishing of the mini-rally seen in AUD/USD towards the end of last year.

However, they are far from the currency’s only problem. It got a modest reprieve against the greenback as investors moved to reassess their more enthusiastic US rate-hike forecasts. However Australian interest rate futures markets are now tentatively pricing-in still-lower local rates, for all that the Reserve Bank of Australia still suggests that the next move will probably be a rise. 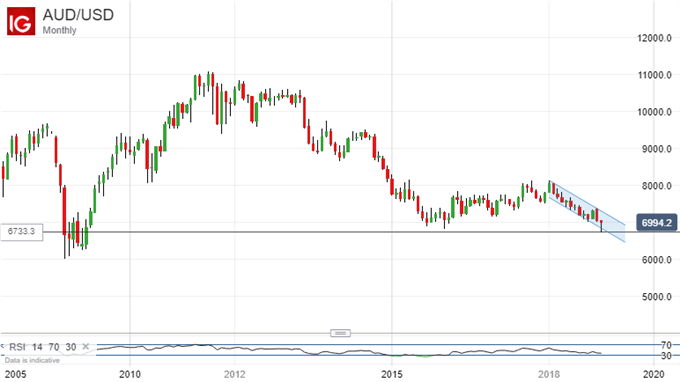 Australian rates have been at record lows for well over two years now, and it seems unlikely that Aussie bulls can hope for any support whatever from that direction. AUD/USD remain in a well-entrenched downward channel and has this week plumbed lows not seen since March 2009.