Asian Stocks Mixed With China Data Supporting, US Payrolls Up Next

Asian stocks were sharply mixed on Friday, with Wall Street’s sharply lower close weighing on some.

Japan’s Nikkei 225 returned to the fray after the holiday season to sharp falls. It was down 2.5% as its close loomed, beset by global growth doubts which were only sharpened by Apple’s guidance downgrade this week. The ASX 200 in Sydney was under pressure too, with major lenders still struggliong with the prospect that Australia’s record-low interest rates could yet be cut further.

The index remains above the downtrend which dominated trade for much of 2018. However, that line now forms near-term support within a range that has now endured since early December. 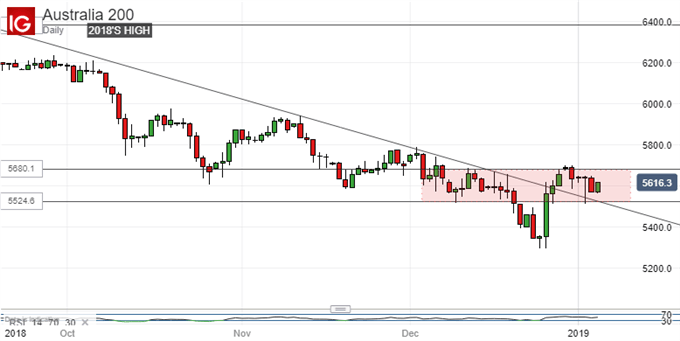 Chinese stocks were more cheerful. Some strong December data from the local service sector set the tone and provided a welcome contrast from a recent run of poor numbers. Shares also seemed to be helped by news that vice-ministerial level talks were scheduled for next week between China’s commerce ministry and its US counterpart.

Currency market risk aversion picked up on this trade news too, with the Japanese Yen slipping in favor of growth-linked units such as the Australian Dollar and indeed the greenback itself. Those Chinese numbers also helped the Aussie to perk up.

Official US employment numbers for December are due later, still arguably the single most watched economic data release of the monthly global round. Nonfarm payrolls are expected to have grown by a chunky 185,000 in December, keeping the unemployment rate steady at 3.7%.

Crude oil prices steadied on the trade-talks news, having slid at the end of 2018 thanks to worries that tariff wars would crimp demand for oil. Gold prices were still firmly underpinned, however.

The trading week is drawing to its close but there’s plenty more economic data still to come. Various PMIs are due from around Europe, with German unemployment stats and Eurozone inflation numbers also coming up. Canadian labor stats are also coming up, but day’s major point of economic interest will be those US payroll figures.