See how our Q1 2019 Trading Forecasts for GBP can help you when trading.

If you are interested in trading, or just curious about how and why market moves occur, we have recently produced a new guide – How to Start Trading: Top Tips and Guides for Beginners – to help you.

The first mini-crash of the year, sparked by a downbeat sales assessment from tech giant Apple, sent a wide variety of risk-on currencies sharply lower, while the Japanese Yen picked up a massive bid. Apple warned that its iPhone sales to China would be lower than anticipated, pointing to ‘rising trade tensions’ between China and the US. The news broke around the same time as the US – Asia rollover when FX liquidity is at its thinnest, leaving the market vulnerable to sharp moves. Currencies that wouldn’t normally be affected directly by Apple’s woes – GBP for example – were caught in the cross-fire as sellers dominated market moves. GBPUSD fell to below 1.2450, a 21-month low, while GBPJPY shed five big figures in a matter of a couple of hours – and seven big figures on the day - and hit a fresh two-year low.

Flash crashes can offer market opportunities, especially indiscriminate selling of other currencies on crosses. Sterling seems to have been caught in the cross-hairs and may offer short-term opportunities. While potential near-term rebounds exist, notably in GBPJPY, the upcoming Brexit bill vote in the week commencing January 14, will continue to drive Sterling’s longer-term moves.

GBPUSD remains negative but a short-term rebound to the 1.2630 – 1.2660 area cannot be discounted. The RSI indicator is mid-market and does not indicate an oversold market, while the pair trade below all three moving averages. Longer-term horizontal support is seen around 1.2360 (April 2017) and 1.2109 (March 2017). 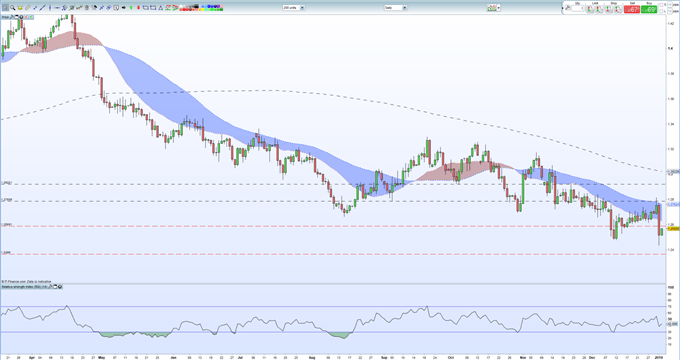 IG Client Retail confirms a negative picture for the GBPUSD. Retail are 75.1% net-long the pair, a bearish contrarian indicator. In addition, the number of traders net-long is 38.4% higher than yesterday and 22.9% higher from last week, while the number of traders net-short is 28.2% lower than yesterday and 24.3% lower from last week, giving us a stronger bearish contrarian trading bias.

GBPJPY on the other hand is currently in heavily oversold territory, according to the RSI indicator, and may be due for a short-term rally. The seven-point fall on the day saw the pair hit levels last traded back in November 2016. A break back above the old April 2017 swing-low at 135.60 should open the way for the pair to re-trace back to 138.60, the old June 2017 swing-low. 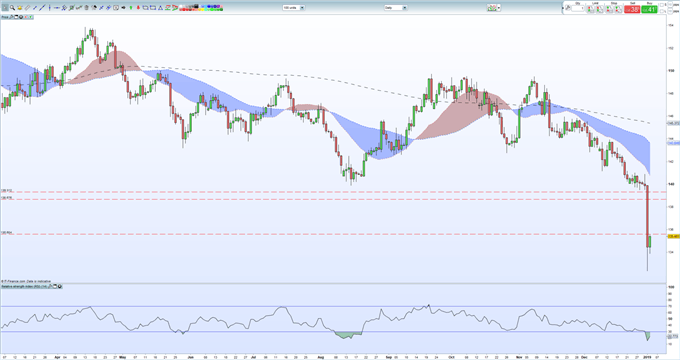 What is your view on GBPUSD or GBPJPY – bullish or bearish?? You can let us know via the form at the end of this piece or you can contact the author at nicholas.cawley@ig.com or via Twitter @nickcawley1.