Most Asian indexes were lower Wednesday as investors digested 2018’s heavy losses. There was more gloomy news out of China’s manufacturing sector too, which took the mood down further. The region was without usual bellwether Tokyo, however, with the Nikkei 225 closed for a public holiday. Still the ASX 200 was open and it shed 1.6%. Shanghai was down 1.3% with Hong Kong lower by 2.2%.

The Caixin Purchasing Managers index snapshot of China’s factory activity showed its first contraction since May 2017. The release came after official PMI numbers already in the market and which also showed a reduction in activity.

Australia’s stock market has traded back up into its former trading range after setting new 2018 lows in late December. 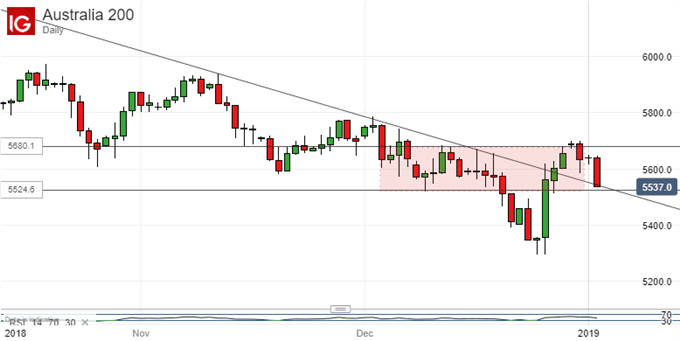 Still, the old daily-chart downtrend is now acting as support and looks likely to be tried very soon.

Global growth worries are never far from the foreign exchange market at the moment and those Chinese numbers brought them very much to the fore. Haven assets such as the Japanese Yen caught a modest bid while more growth-sensitive units like the Australian Dollar struggles.

Still to come on Wednesday’s scantily populated economic schedule are various PMI numbers from Europe, the UK the US and Mexico.