The Euro has recently gained against the greenback, paring losses sustained for most of this year. However, whether EUR/USD extends its upside momentum or succumbs to long-term interest rate differentials is yet to be seen. Here’s what some of the DailyFX analysts think:

EUR/USD’s failed attempt to test the November-high of 1.1500 and recent hawkish forward guidance from the Federal Reserve could indicate near-term bearish momentum, according to Currency Analyst David Song. Lingering interest rate differentials fuelled by the European Central Bank’s commitment to its zero interest rate policy, combined with long-term bearish formations in the Relative Strength Index, could also point towards losses for the currency pair. Near-term support for the Euro comes in near 1.1220 (78.6% retracement), while 1.1510 (38.2% expansion) could keep the unit capped into 2019. 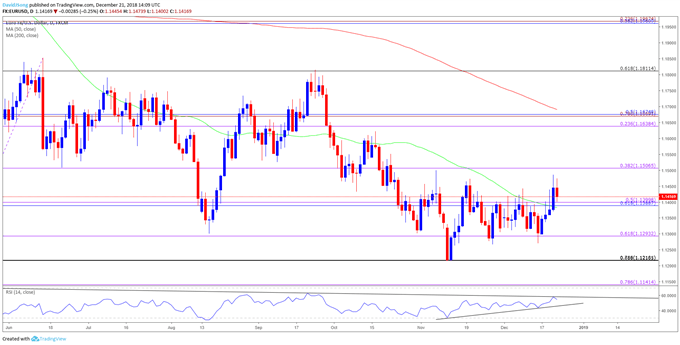 On the other hand, the currency pair could be poised for a rally on key fundamental themes, according to Currency Strategist James Stanley. A breakthrough in the Italian budget saga and the ECB’s recent announcement that bond buying in its quantitative easing program would end could spur a rally for EUR/USD. Euro bulls should look for a break above the 1.1500 level following fresh December highs, with further evidence of higher-low support.

Looking ahead, low liquidity due to the holiday season and partial US government shutdown means that EUR/USD could be susceptible to volatile fundamental themes. Traders should keep a close eye on developments on long-term market issues, especially ongoing US-China trade talks, equities’ rout, and Brexit negotiations with the EU. In addition, the currency pair also faces the release of December’s US consumer confidence data and preliminary German inflation figures.