Often, I am asked where a currency or market will be at a specific date into the future. My response will almost always start with "I don't know." Everything in trading is a probability. There are no certainties, and to assume where a market will be and at a specific time is to whittle down the probabilities of success to almost ensure your assumptions will be disproven. That said, there are certain events with such significant weight that markets will inevitably change as they unfold or after they pass. Brexit is one of those events. Considering how volatile the discussions have been through 2018, it is reasonable to anticipate further switchbacks in these negotiations through the opening months of 2019. I have little interest in attempting to trade anything more than very short-term opportunities in the Sterling as they arise through that uncertainty. However, when there is a clear resolution, the lifting of uncertainty will allow for a trend - though that could be ambiguous to direction. A no deal will likely see the Sterling drop further, but once early trade deals are struck with key counterparts, the currency will start to recover from a further depressed level. If there is a compromise - and this is true of most scenarios in this middle ground - the Pound will start to rise over the subsequent months as it is implemented. If there is a second referendum, some degree of uncertainty will remain until the vote is tallied. Revoking the initial Brexit will lead to a Sterling rally while reaffirming the initial decision would push back the time frame for the eventual recovery - the only scenario I wouldn't expect a more systemic Pound recovery. There are no explicit times or levels in this, but that is the nature of trading - the less obvious the key levels and timetable, the more significant the ultimate move. For pairings, my preference runs less towards those explicitly risk oriented and more dependent on liquidity: GBPUSD and EURGBP. 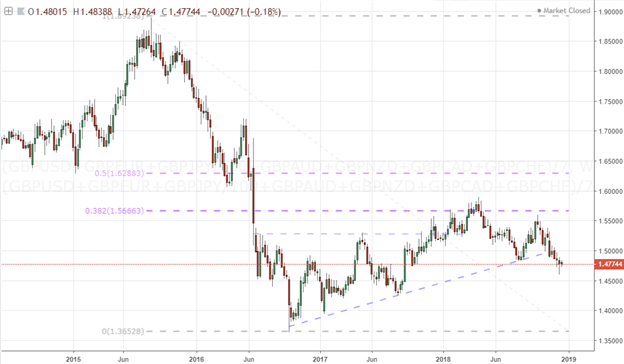 Outside of FX, I have a general expectation for risk aversion to take hold across the financial system in 2019. Looking back over this past year, we have seen a number of asset classes that are otherwise unrelated with the exception of their connection to sentiment slide significantly - such as emerging markets, junk bonds, commodities, many regions' equities markets, etc. Yet, many have maintained a rosier assessment of the financial system than what this would tell us because they are reluctant to give up on the convenient complacency of the past decade which led to so many padded investment accounts. And for many, the source of their confidence has been US equity indices. They didn't commit to the full course reversal that so many of their international counterparts had by the close of 2018. That said, they experienced frequent bouts of extreme volatility amid deeper fundamental concerns surrounding the strains of global monetary policy, slowing growth and trade wars. It is difficult to envision a genuine scenario for the year ahead that paints the US shares market as 'oversold' or 'value' - but there are many routes for which fear sweeps in. I will look for US indices to struggle. That can be through further breakdown of key levels - like the S&P 500 below 2,500 - but a more strategic approach would be to take a short view on the US markets relative to developed world counterparts (so a S&P 500 short to VEU all world ex US long would be a good reflection). 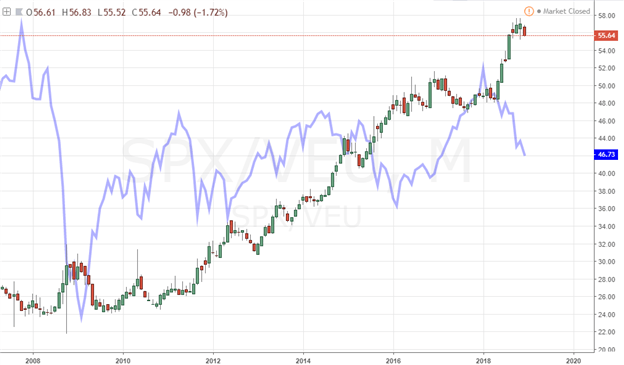 My concern over systemic tides converging is such that I feel much of the opportunity in the year ahead will be found in the best means to exploit the fallout. Short over-leveraged 'risk' assets is one way to express this view. However, I'm particularly interested in what Gold represents relative to this perspective. The metal is often considered a traditional safe haven and left at that. It certainly qualifies for this role, but its utility runs far deeper than that. Looking back to recent history, we find gold experienced a remarkable rally into 2011. This charge was the combination of an aversion to traditional risk paired by the active devaluation of all the major currencies in concert via stimulus programs. If we have another tip into recessionary fear, monetary policy will be a highlight once again - but not because of a sharp and deep dovish turn. The developed world's central banks don't have capacity to fend off such a tide should it form. Instead, the depreciation in traditional fiat currencies would arise from the recognition that easing has been rendered completely ineffective. A charge to $1,360 could occur through otherwise mundane circumstances. I would look for the move above $1,400 with such a convergence of misfortunes for the financial system.

Chart of Gold and Inverted US 10-Year Treasury Yield (Monthly) 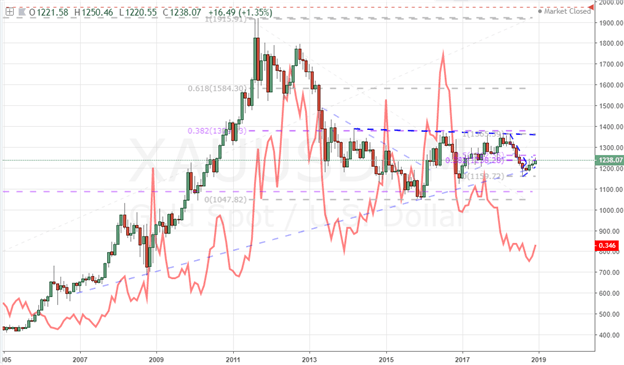 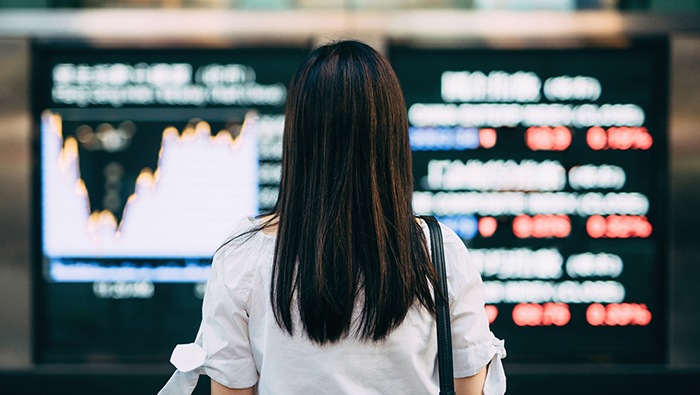