The risks to stability in the Eurozone are rising, and with them, the risks to the Euro. Issues are cropping up everywhere, and it’s possible that Europe may see significant leadership turnover just as debt and growth concerns have started to make waves again:

Following the Brexit vote in June 2016, fears swelled over the rise of populism across the continent. But following defeats by populists in the spring of 2017, political risk for the Euro has seemingly been relegated to the backburner. Now, as the calendar turns to 2019, the grace period for European politics may be over. The preferred avenue to express this negative EUR bias is via EUR/JPY. The Japanese Yen side of the trade is appealing, given the Yen’s role as a safe haven during times of significant economic and political turmoil (which is the risk to the Euro at present time).

Fundamentally, a tweak to Japanese fiscal policy may also serve to support the Yen moving forward: starting in 2019, the Japanese Global Pension Investment Fund (GPIF) will start hedging its investments denominated in foreign currency. Currently, the GPIF’s unhedged investments mean that the GPIF is essentially short JPY as long as it hold assets denominated in foreign currencies. Moving forward, hedging these investments means the GPIF will deploy long JPY positions. This is a small, but meaningful change for a key player in Japanese financial markets. 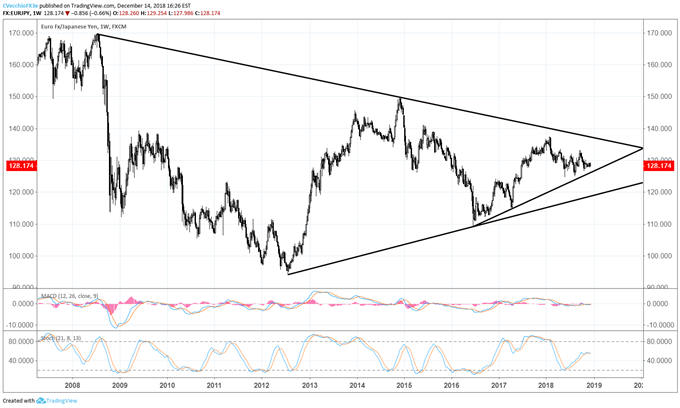 Technically speaking, EUR/JPY has been funneling into the confluence region of its symmetrical triangle support dating back to the 2008 and 2014 highs and the 2012 and 2016 lows. A look at the weekly timeframe shows that the relationship between price and time dictates that the symmetrical triangle should find resolution by the end of 2019 (chart 1, above).

Given our fundamental bias for lower EUR/JPY prices, our expectation is for price to move towards support over the course of the year. In the early part of 2019, in line with our view for EUR/JPY weakness, traders should keep an eye on the rising trendline from the 2016 and 2017 lows (chart 2, below). If EUR/JPY trades sideways from its closing price on December 14, it will run into the rising trendline support from the 2016 and 2017 lows before the end of Q1’19. 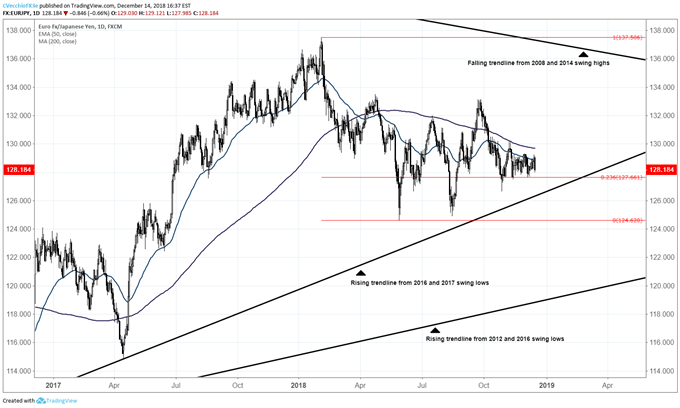