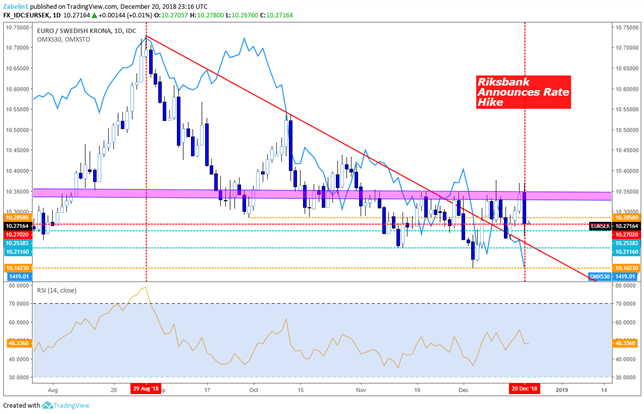 Governor of the Swedish National Bank (SNB) Stefan Ingves in a press conference acknowledged that the economy has been cooling but the bank’s economic forecasts had already taken this into account. He said concern for Sweden’s economy now revolves around the country’s unprecedented political gridlock and global uncertainty surrounding world trade and growth.

Ingves said the central bank will likely raise rates again sometime in the second half of 2019 and indicated a cautious and gradualist approach for monetary policy in the future. He said rates will continue to slowly rise in the coming years – likely taking into account the projected slower growth in 2019 and the impact it might have on Sweden’s export-driven economy.

Looking ahead, the Riksdag – Sweden’s parliament – will be voting on the Speaker’s third recommendation for Prime Minister on January 16. If that candidate is voted down, a fourth vote will be held on January 23 before a snap election is triggered. If it is, the earliest that it could occur is April 21. While initially appearing benign, Sweden’s ongoing political gridlock is beginning to weigh on policymakers. It may serve as a foreshadowing of what may come in the EU parliamentary elections in the spring of 2019 as the continent faces greater political fragmentation.