Market Does Not Buy OPEC Strategy

Roughly 2 weeks since OPEC and Non-OPEC members agreed to cut oil production by 1.2mbpd, oil prices have continued its plunge, falling an additional 10%. The reason being is that, while oil prices may have initially been boosted on the basis that the size of the cut had slightly surprised market expectations, it still however, failed to reach the required size in order to offset a supply glut seen in 2019. That said, this morning’s drop had been exacerbated by increasing worries over weak demand with risk markets dented by the Federal Reserve’s decision to roughly maintain its guidance regarding additional rate hikes, at a time where US data and equity markets have underperformed.

According to data from OPEC, an oil glut is expected throughout 2019 with a surplus reaching as much as 1mbpd by Q4 2019. This in turn, will likely see OPEC supply curbs which will begin from January for 6 months, to be extended for the remainder of 2019 with the potential for a larger cut, unless prices stabilize. Talk surrounding a possible extension however, will likely increase in the run up to the April 2019 bi-annual OPEC+ meeting. Of note, Saudi Arabia have shown increased worries given that they have already signaled a potential extension to oil cuts, which haven’t taken effect yet. Alongside this, EIA data shows global inventories are expected to post a build throughout the majority of 2019, providing another negative outlook for oil prices. This negative outlook had also been aired by the IEA Head, Birol, who stated that he does not expect a sharp increase in oil prices in the short term, unless there is a geopolitical problem. 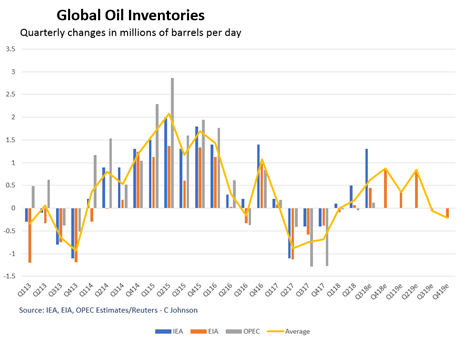 The bearish outlook in oil prices has been reflected in the Brent crude futures curve, which shows that prices are now in contango until Q4 2019, implying that oil prices could remain on the lower for longer path.

Having made a brief break below the $55 mark, eyes will be on for a close below, which could see Brent close in on a move towards $50. Little in the way of notable support ahead of $50, with the bearish trend remaining prominent.