Cryptocurrency Market Back From The Abyss

The cryptocurrency market has made a sharp u-turn and is powering higher after hitting multi-month lows last week. Market capitalization has rallied from just over $100 billion to $130 billion while turnover has picked up from around $12-13 billion to more than $21 billion in the last 24-hours. A combination of oversold market conditions and short-covering are cited as the main drivers as we head into the Christmas break.

While the current price action is eye-catching a note of caution is still warranted after the heavy losses seen since the start of the year. New money will be needed to keep the move going, especially as investors remain heavily long of the cryptocurrency mrket as a space.

If you are interested in trading the cryptocurrency market, we have produced a Day Trading Guide to Bitcoin and Other Cryptocurrencies to help you better understand this highly volatile asset class. 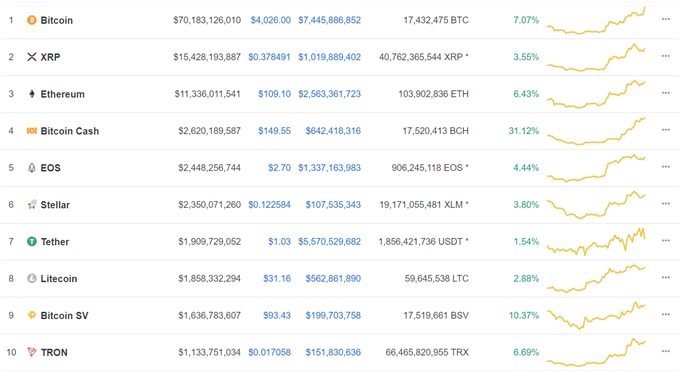 DailyFX analyst and Elliot Wave expert Jeremy Wagner highlighted the potential rally in Ethereum and Ripple in one of his regular webinars recently.

One crypto that catches the eye is Bitcoin Cash (BCH) which has endured a roller-coaster ride over the last six-weeks. After making a recent pre-fork high of $640 on Novermber 7, the coin slumped all the way back down to $75 last week. The price has doubled since to the $150 level after being in heavily oversold territory shown by the RSI indictor at the bottom of the chart. The four-hour chart now indicates that the market is now heavily overbought and caution should be exercised in this highly volatile crypto that traded at a spike high of over $4,000 just one year ago.

Investors remain net-long cryptocurrencies but recent changes give us a mixed trading bias across the space with some cryptos showing bullish contrarian readings while other remian negative.

What’s your opinion on the latest cryptocurrency surge? Share your thoughts and ideas with us using the comments section at the end of the article or you can contact me on Twitter @nickcawley1 or via email at nicholas.cawley@ig.com.