Asia Pacific stock markets were mixed and rather subdued Wednesday as investors looked toward the final US Federal Reserve monetary policy decision of 2018. Rates are expected to rise a quarter point- to 2.25%-2.50%- but a more cautious path of increases into 2019 is expected too. The decision will come through well before regional markets reopen on Thursday.

Oil prices were also in focus. They swooned to their 2018 lows in the previous US session as investors fretted about weaker global demand hitting still-healthy supply.

The Nikkei 225 was 0.7% lower as its close loomed on Wednesday, with the Shanghai Composite and Sydney’s ASX 200 off by 0.2% apiece. The Hang Seng was up by 0.1%, with South Korea’s Kospi up 0.8%. Shares of Softbank’s mobile unit fell sharply in Tokyo on the day of their IPO, the second largest every behind Alibaba.

Foreign exchange trade saw the US Dollar slightly lower as those prognoses of a less hawkish Fed continued to swirl. USD/JPY has slipped significantly below the uptrend channel which had previously contained trade since May. 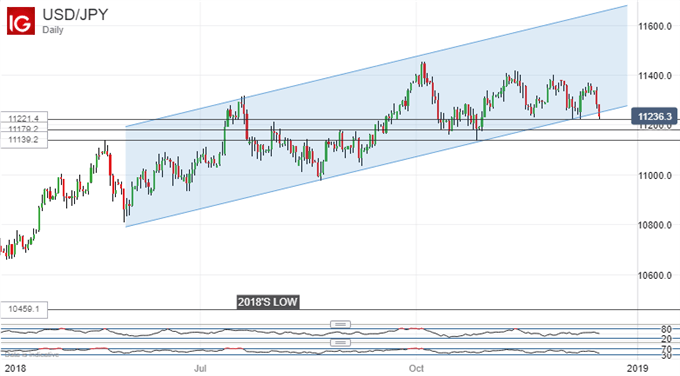 Near-term support is holding, however, and the US Dollar will retain a significant yield advantage against its Japanese rival for the foreseeable future under all likely scenarios.

Wednesday’s economic data slate will remain pretty lively. German producer prices are coming up, along with official inflation numbers out of the UK and Canada. However the impact of any and all of these will be blunted by that wait for the Fed.