The New Zealand Dollar got a Tuesday boost from news that businesses in its home country were feeling better about their prospects than they had for the previous eight months.

December’s business confidence index from the Australia and New Zealand Bank came in at minus 24. Now this is hardly champagne territory. A clear balance of firms is still downbeat. However, the survey was far better than November’s minus-37 print and it also continued the run of improvement seen since August’s nadir.

This measure has been in negative territory for fifteen months. Indeed, confidence became such a problem that the New Zealand government set up an advisory council back in August to see what could be done to lift the gloom. And it is notable that confidence levels remain well above the levels seen last summer even if, overall, they remain subdued. The activity outlook sub-index rose to 13.6. its best showing for seven months.

NZD/USD snapped up quite sharply on the release 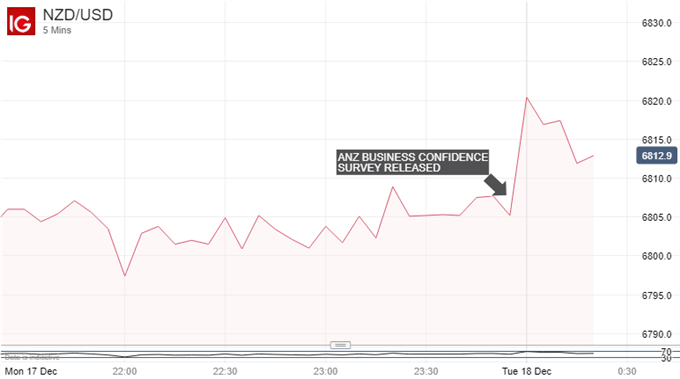 However, its gains were short lived in a foreign exchange market hunkered down for the final US monetary policy decision of the year, which will come on Thursday morning New Zealand time.

NZD/USD’s daily chart shows the pair still well above the downtrend which characterized much of this year. While New Zealand interest rates remain at record lows, a rethink about how much further US rates might rise has supported the Kiwi in the last couple of months. 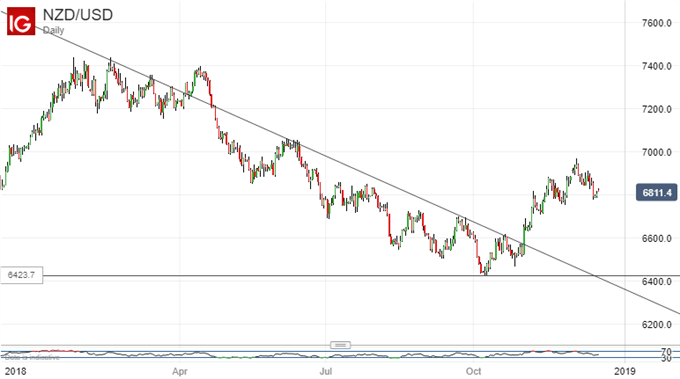 However, NZD/USD appears to have topped out for the moment at least, at the peaks of early December. A dovish performance from the Fed this week may give it a fillip into year end