- The QE program will end this month; the ECB will continue to reinvest APP flows for an extended period of time.

- Retail traders have trimmed their net-long EUR/USD positioning over the past week.

The Euro has seen a bit of turbulence this morning around ECB President Mario Draghi's press conference. Losses arose quickly at the start of the press conference as the ECB made cuts to its GDP forecast for 2018 and both its GDP and inflation forecasts for 2019.

Even with the ECB's QE program ending later this month, Draghi made clear that "significant stimulus" is still required to sustain inflation as "the balance of risks is moving to the downside." This is not necessarily a surprise, given the sharp decline in energy prices seen since the start of October. Similarly, Draghi's favorite market measure of medium-term inflation expectatins, the 5-year, 5-year inflation swap forwards, are holding near their yearly low (having declined 15-bps from their high of 1.774% in January).

Finally, the topic of additional easing measures came up, and the details suggest that some momentum is gaining steam for another set of liquidity-supporting measures in early-2019. At the prior meeting in October, it was noted that "two" Governing Council members broached the topic of another TLTRO program; at the December meeting, this description was revised to "some." Splitting hairs, there were more members advocating for a TLTRO in December than there were in October. It's not difficult to foresee a TLTRO announcement before the end of Q1'19. 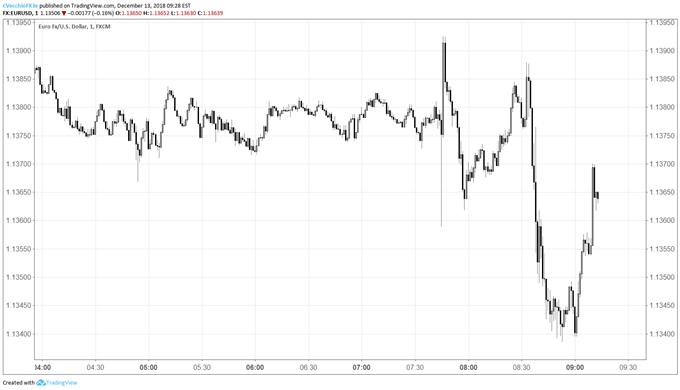 As we neared the end of the allotted speaking period, earlier losses by the Euro were largely retraced, leaving the single currency largely unchanged on the day. EUR/USD opened the day at 1.1366, traded as high as 1.1393 and as low as 1.1338, before returning back to 1.1360 at the time this report was written. Overall, the ECB rate decision was in-line with our expectations outlined in the weekly trading forecast: volatility in EUR-crosses, but no clear direction.

The ECB left monetary policy unchanged as expected while the accompanying statement was also in-line with market thinking.

The central bank re-confirmed that the bond buying program (APP) would cease at the end of this month while all principal payments and flows will be reinvested ‘for an extended period of time past the date when it starts raising the key ECB interest rates’. The ECB said that it will not raise rates ‘at least through summer 2019’.

EURUSD was little changed net, post-announcement and traders will now wait to hear President Draghi’s latest views on growth and inflation in the Euro-Zone at the 13:30 press conference. 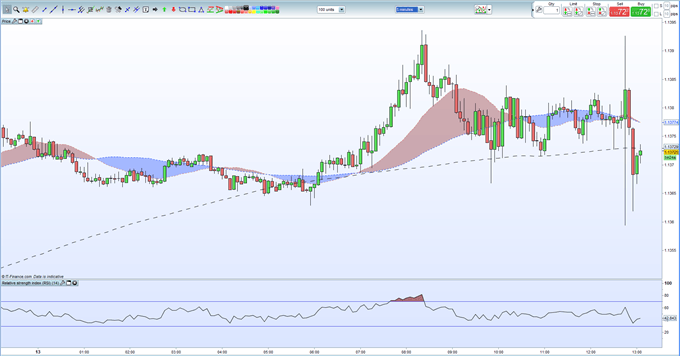 What is your view on EUR/USD – bullish or bearish?? You can let us know via the form at the end of this piece or you can contact the author at nicholas.cawley@ig.com or via Twitter @nickcawley1.