Sterling (GBP) Still at the Whim of the EU Negotiators

After a comfortable victory at last night’s no confidence vote (200 – 117), UK PM May returns once again to Brussels for further talks about how to break the Brexit impasse that continues to weigh on the British Pound. While the margin of the victory may help empower the PM, the fact that 117 MPs voted against her means that the current Brexit deal favored by the Prime Minister will not pass a Parliamentary vote, leaving her back at square one. UK PM May will talk to negotiators in Brussels later hoping that her victory will lead to the EU offering some sort of concession over the Irish backstop arrangement that will enable her to push through with her plan. Political chatter suggests that the EU may change some wording but will not change any legal text, leaving it up to the Theresa May to try and persuade her critics to take the EU’s word without any legal obligation being in place.

The GBPUSD mini-bounce on Wednesday - off a 20-month low - now looks likely to be re-traced over the coming trading sessions unless the EU changes its stance, and that seems very unlikely. The daily chart shows the upside blocked with resistance starting at 1.2734, the 20-day moving average, followed by old support at1.2785 and the 50-day moving average at 1.2854. To the downside, the recent low area between 1.2474 and 1.2476 remain the first target ahead of two weekly lows made in early April 2017 around 1.2350. 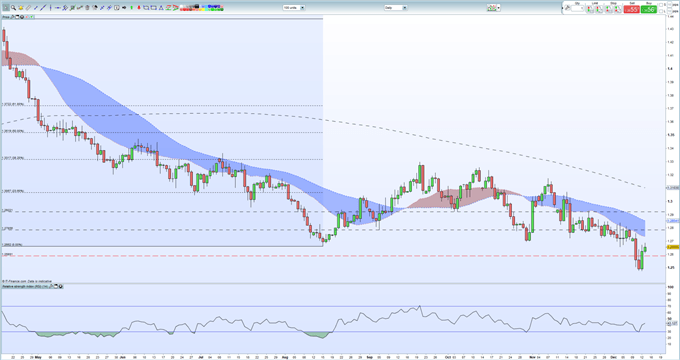