The Australian Dollar has fallen for five straight days since the arrest of Huawei CFO Meng Wanzhou in Canada. The charges levied against the tech giant executive were rooted in allegations that the company had illegally circumvented US-imposed sanctions against Iran. 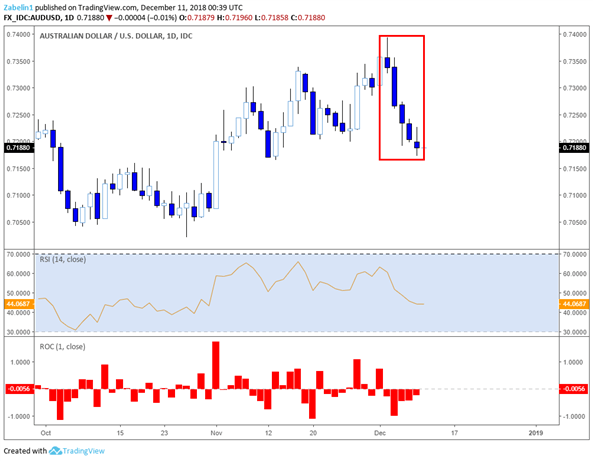 The firm allegedly created a shell-company (Skycom Tech) to do business with Iran while keeping the connection between the two a secret. As a result, banks that engaged in financial transactions for Huawei were supposedly indirectly doing business with Skycom, and therefore Iran. One of the charges placed against Meng includes fraud.

The US is demanding Meng’s extradition from Canada to face charges in domestic courts, possibly leading to a 30-year prison sentence or more. China is strongly opposed to Meng’s extradition. The US is eminently opposed to Canadian courts permitting Meng to post bail, given that any financial cost incurred from the release would be a drop in the pond for the CFO of the second largest smart phone manufacturer.

The timing of the scandal comes only shortly after the US and China agreed to a 90-day economic ceasefire where the two could hammer out an amicable agreement on trade policies. The debacle is straining an already fragile relationship and adding the possibility that the economic armistice may collapse and lead to a resumption of the trade war. This would likely result in the decline of the Australian and New Zealand Dollar along with other risk-on assets. Conversely, the US Dollar and Japanese Yen may outperform.