Risk trends remained fragile during Tuesday’s Asia Pacific trading session even though there was a recovery in tech shares on Wall Street. This was also despite reports that China’s Vice Premier Liu He discussed trade with US Treasury Secretary Steven Mnuchin. As a reminder, last week market mood collapsed with global shares following a disappointing G20 Leaders’ Summit and an inversion in certain US bond yield spreads.

As such, APAC trade saw rather mixed performance beginning with Japan. The Nikkei 225 was down about 0.40% heading into the close. Despite information technology holding up the S&P 500earlier, here it weighed against the Japanese benchmark. South Korea’s KOSPI was little changed coming in at around +0.10 percent.

Meanwhile China’s Shanghai Composite outperformed, rising about 0.28% in the aftermath of the US China trade update. Australia, which is the most reliant on the world’s second largest economy in terms of its trading partners, saw its equities gather even more momentum. The ASX 200 climbed about 0.42% as we approached the end of the day.

Looking at currencies, the anti-risk Japanese Yen was heading higher as it focused more on domestic developments in stock markets. The temporary burst of risk appetite following the trade news bolstered the pro-risk Australian and New Zealand Dollars. The US Dollar gave up some gains from Monday as its alternatively high-yielding counterparts rose.

S&P 500 futures are pointing a little lower, insinuating that stocks could still be at risk during the European and US trading sessions. The British Pound and the FTSE 100 remain vulnerable to stray Brexit headlines with Tuesday’s vote on the exit draft now delayed. Meanwhile from a technical perspective, AUD/USD and AUD/JPY could extend their reversals.

Taking a close look at the Nikkei 225 below, we do have the presence of positive RSI divergence. This signals fading downside momentum and it may precede a turn lower bar negative fundamentals. Should support between 20,950 and 21,035 hold, we may see it climb and test former support now resistance at 21,851. 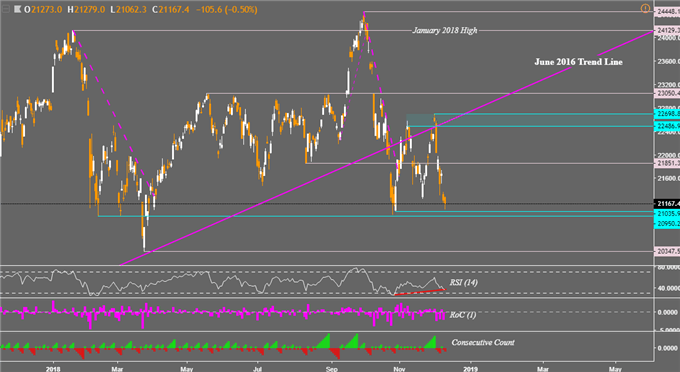