UK PM Theresa May is expected to lose the Brexit agreement vote in the House on Tuesday by a large majority prompting increased speculation that the vote may be delayed allowing the PM extra time to talk with the EU over extra concessions. PM May spoke with EC President Donald Tusk over the weekend, along with Taoiseach Leo Varadkar, with the contentious Irish border high on the lists of topics discussed. It now looks impossible for the Brexit agreement to be passed in its current form and a heavy defeat leaves PM May under mounting pressure to either renegotiate an improved deal or resign.

The latest UK hard data shows the economy slowing down since Q2 with GDP month-on-month growth up just 0.1% since October, while monthly industrial and manufacturing production fell sharply by -0.6% and – 0.9% respectively. In all, monthly UK GDP 3m/3m fell to 0.4% from a prior reading of 0.6%.

GBPUSD remains near the multi-month low last attempted on December 4. The increased volatility around Sterling makes it difficult to see any upside, as things stand, and GBP weakness will remain until the Brexit agreement - in whatever form it may finally take - is agreed on by the UK Parliament. 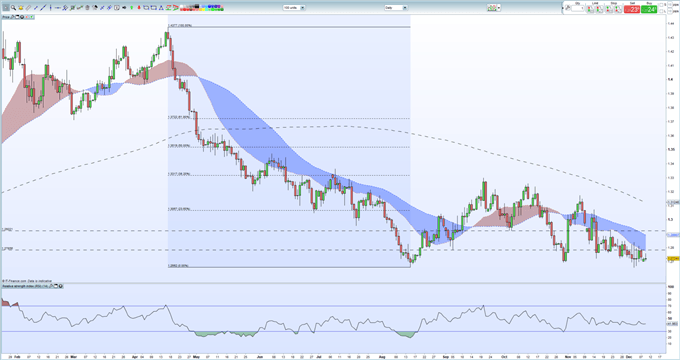 IG Client Sentiment data show 69.8% of traders are net-long GBPUSD. We typically take a contrarian view to crowd sentiment, and the fact traders are net-long suggests that GBPUSD prices may continue to fall. However the combination of recent daily and weekly positional changes gives us a mixed GBPUSD trading bias