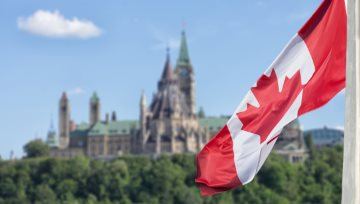 The Bank of Canada (BOC) announced earlier today that it will hold its overnight interest rate target at its current level of 1.75 percent following the recent increase of 25 basis points in October. In the press release put out with its decision, the BOC seems to paint a dimmer view on economic outlook in suit with the recent narrative shift by global central bankers. A notable difference in language between the press releases little over a month apart is the change from “global economic outlook remains solid” at the end of October to “global economic expansion is moderating” today.

Today’s report states Canada’s economy continues to grow at a moderate pace and in line with third quarter projections, however, buoyed by household spending and export growth. Household spending and export growth have been expanding as tailwinds from minimum wage increases earlier in the year support rising incomes and robust foreign demand sends Canadian goods overseas.

Another positive highlight points to the revision higher for business investment as uncertainty surrounding trade policies are expected to fade after the signing of the US-Mexico-Canada Agreement (USMCA) at the G20 summit in Argentina last weekend. Stabilization of household credit and regional housing markets are listed as other positive developments after the sizeable slowdowns in recent quarters for the two segments.

While inflation is expected to wane moving forward, the central bank alluded to possible future policy rate increases to a neutral level in order to maintain its inflation target. Trend inflation remains at reasonable levels in Canada, although the CPI for October was slightly above BOC’s target range at 2.4 percent. Expected inflation shows prices moderating as the effects of lower gas prices trickle down and the impact of minimum wage increases earlier in the year dissipate. Markets seem to disagree judging by the futures implied probability of a 25 basis point increase in the central bank’s overnight policy rate. The option market now prices a 39.3 percent change of a hike at January’s meeting which is down from 59.4 percent yesterday.

The expectation of lower future interest rates is not isolated to Canada. Below is a graphic listing the probabilities of a 25 basis point increase by mid-2019 across major central banks. 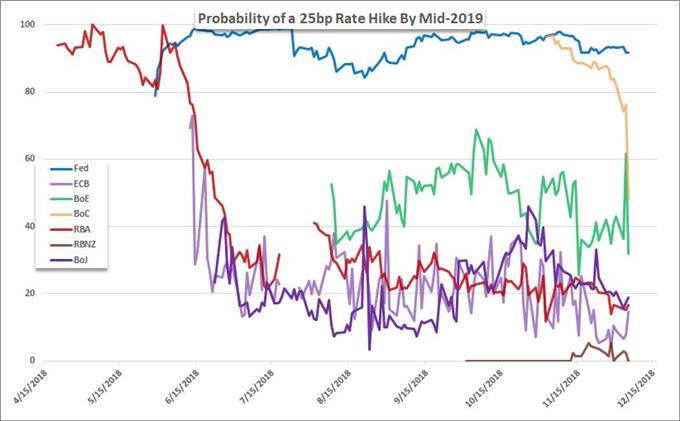 The press release sent the loonie lower as seen in the Canadian Dollar Currency Index Price Chart (15-Minute Bars) below. Markets will turn their attention to Canadian employment numbers reported this Friday and housing stats on tap for next week. The next BOC meeting will be held on January 9, 2019.