The US Dollar continued to track down too

Asian stocks retreated broadly on Tuesday as investors fretted details of the very US/China trade truce which had seen equity power higher the session before.

Last weekend’s arrangement marked some progress in trade talks, but the specifics remain unknown and both the US and China have presented it in subtly different ways. Some investors are also wondering if the 90-day window opened at the G20 meeting in Argentina will be anything like long enough for meaningful resolution of all the many issues which have dogged trade between the two global titans.

Sure enough the Nikkei 225 slipped by 1.9%. Shanghai was off by far less and indeed had pared losses almost back to flat in the middle of its afternoon. Hong Kong was down 0.6% with the Kospi and ASX both 1% lower.

Australian stocks look set to close below their previously dominant uptrend for the first time since it bounced last month at this year’s lows. 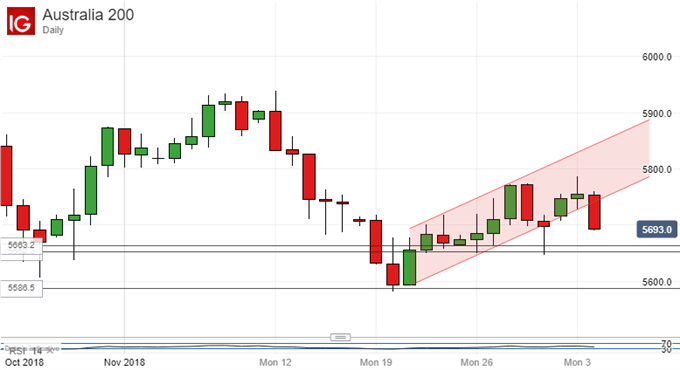 Support at the lows of late November are now in focus.

The US Dollar slipped a little across the board after Treasury yields headed South- a sign perhaps that some investors think fewer rate rises will come next year. However the trade truce may also have played a part here in supporting riskier currencies at the Dollar’s expense. The Australian Dollar rose a little, probably on this score. It’s unlikely that the Reserve Bank of Australia’s decision to leave the Official Cash Rate on hold at its 1.7% record low yet again played much part in AUD/USD action.

Still to come on Tuesday are Consumer Price Index data out of Switzerland and the UK’s construction-sector Purchasing Managers Index. Bank of England Governor Mark Carney is due to speak at the British Parliament.