AUTOMOBILE TARIFFS LOOM ON THE HORIZON

Sentiment-linked assets such as the Australian and New Zealand Dollar may suffer soon amid fears of a new automobile tariff that may trigger retaliations. President Donald Trump announced Wednesday that he is exploring new auto tariffs as a way to promote domestic production and protect jobs. This comes as part of his broader protectionist initiatives that has characterized his administration’s economic policies.

GM announced on November 26 that it intends on closing five North American plants in 2019 in addition to cutting salaried staff. In the US, plants in Michigan and Ohio will be closed.

Trump cited the 25 percent tariff imposed on light trucks in the 1960’s during the Chicken Trade War, claiming that it promoted domestic production and job creation. However, after the economic conflict subsided, the US auto industry lobbied Congress to maintain the tax as a way to shield them from foreign competition. The overall result was a loss in welfare and higher prices for consumers.

After the Trump Administration imposed aluminum and steel tariffs, the EU responded by imposing duties on key US exports e.g. whiskey, motorcycles and orange juice. This came amid the beginning of the trade war with China. The IMF’s 2018 publication of the Financial Stability Report in October cited the trade wars as a leading factor in global risk aversion and instability.

The automobile tariffs would likely further strain relations with China and escalate trade tensions with Japan, a major automobile exporter. The EU would almost certainly impose retaliatory tariffs, considering the Union’s largest economy – Germany – is one of the world’s largest automobile exporters. Other noteworthy auto exporters include Belgium, Italy and France.

Throughout 2018, the US-led trade wars have been a key factor which has exerted downward pressure on cycle-sensitive assets. The Australian and New Zealand Dollar have been on a steady decline as the outlook for global growth remains uncertain. This is also occuring against the backdrop of a Hawkish Fed that has been a noteworthy contributing factor driving risk aversion.

If new automobile tariffs are imposed, the probability of retaliation is fairly high. The Australian and New Zealand Dollar along with the Euro would likely decline as risk aversion tightens its grip. Emerging markets would likely suffer as well. Risk-off assets such as the Japanese Yen and Swiss Franc would likely outperform their risk-loving counterparts.

Trade Wars Weighing on the Aussie and Kiwi 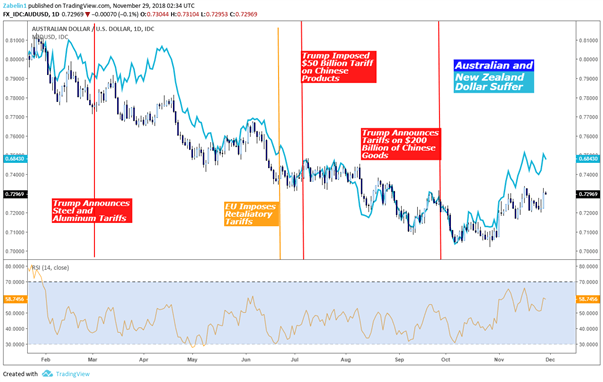 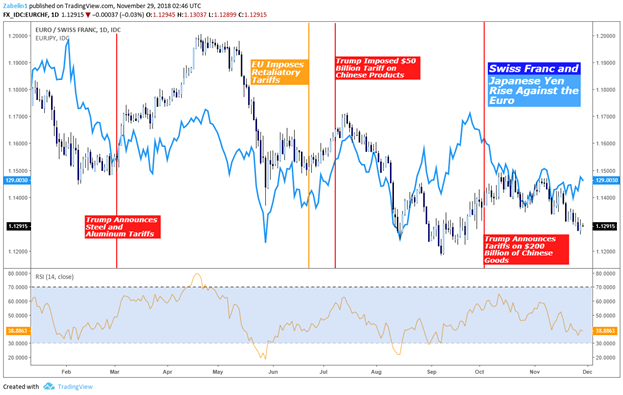