Minutes released by the Federal Reserve's FOMC today covering its November 7-8 meeting revealed that the central bank looks to stay on course for its fourth rate hike this year at the conclusion of its next meeting on December 19. The FOMC minutes, which detail the central bank’s internal deliberations over managing its dual mandate of maintaining stable prices and low unemployment, addressed the Fed’s current reading on the health of the US economy and its future outlook. The release detailed “almost all participants expressed the view that another increase in the target range for the federal funds rate was likely to be warranted fairly soon.”

The report implied that the Fed intends to stand pat on its position to raise the target federal funds rate an additional 25 basis points from the current range of 2.00-2.25 percent seeing that “the labor market had continued to strengthen and that economic activity had been rising at a strong rate.” However, the future path for policy normalization has grown increasingly uncertain. The minutes allude to the recent shift in the Fed’s narrative for “slow-and-steady” increases in the Fed’s policy rate to a less hawkish stance as Jerome Powell, Chairman of the Federal Reserve, states the central bank is not on a “preset policy path.”

Concerns were voiced over the adverse impact from tariffs in addition to deteriorating credit fundamentals, which follows other risks pointed out in the Fed’s Financial Stability Report (FSR) published yesterday. Additionally, Chairman Powell’s stated after the FSR release that rates are “just below” the range of the neutral rate of interest, estimated at 2.5-3.5 percent. The sudden dovish pivot by the head central banker compares to his comments after the FOMC meeting a month ago where Powell viewed rates “probably still a long way” from the neutral rate of interest.

The Fed minutes also pointed to signs of global growth slowing as well as the dying tailwind of fiscal stimulus from tax cuts and federal spending all posing downside risk to the economy. However, the minutes note that FOMC participants “suggested that some of these financial vulnerabilities might not currently represent risks to financial stability so much as they represent downside risk to the economic outlook.”

Following the release of the minutes, the dollar began to extend its slide further from yesterday’s drop as markets start to price lower interest rates ahead. 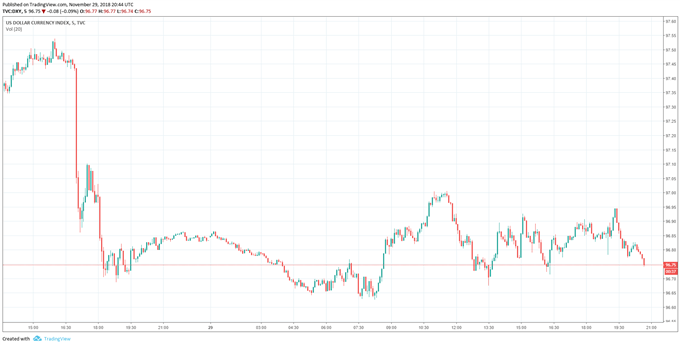 As for US equities, investors appear pleased by the Fed’s move towards a less hawkish approach to normalization with the S&P500 up over 2 percent since Powell spoke at the New York Economic Council following the FSR release. 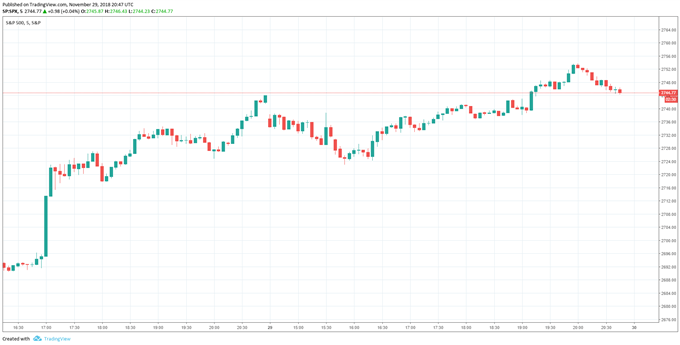 But, the move could prove short lived if a complacent market is caught off guard by further gradual tightening next year. Given the recent move higher across the major stock indices as markets now expect fewer hikes in the future, the probability of a lower interest rate trajectory in 2019 appears overestimated considering the Fed is still 4 hikes below the midpoint of its current estimate for the neutral rate of interest.

For more information on DXY and SPX sentiment click here