The Bank of England analysis of various forms of Brexit produced the expected shock numbers and doom and gloom warnings of severe economic contraction, along with precipitous falls in UK house prices and the value of Sterling. And while these warnings are necessary, it may be that the worst official analysis is now out in the market and factored into the price of the British Pound.

A look at equally trade-weighted Sterling against G7 currencies shows that while is weak, it has been substantially weaker over the last year. Again a 25% maximum fall would take it near/into record low territory. While the BoE does have to show the ‘worst-case scenario’, traders are taking the results with a pinch of salt and waiting for the outcome of the December 11 Brexit vote.

As we head towards the House of Commons Brexit vote, the PM continues to push her deeply unpopular deal, seemingly oblivious to most of her party and the House telling her that the proposal will fail in its current form. It is against this backdrop that others are now becoming more vocal about either a Norway-style agreement or a Canada++ deal. While both options may be more expensive to the UK economy in terms of lost growth - according to official government figures – they may provide the flexibility and the opportunities asked for by large sections of the House and the UK population.

Sterling is a touch lower – around 0.30% - in European turnover against a range of currencies but is holding its own against a mildly weaker US dollar. Before the Brexit vote on December 11, there will be five days of debate in Parliament where MPs will be able to put six amendments to PM May’s plan for a ‘meaningful vote’. It may be at these sessions that a slightly clearer path ahead may be seen, giving Sterling traders a better steer for the months ahead.

GBPUSD support at 1.2662 is expected to hold ahead of these sessions, while bullish price action meets resistance from 1.2920-1.2930 onwards. 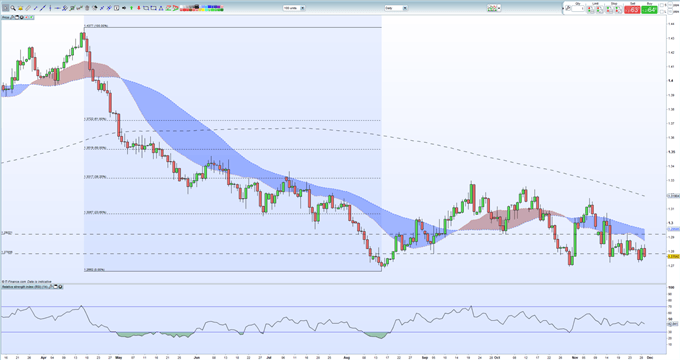