The pound sterling leapt higher as markets brushed off building pessimism over Brexit uncertainty following the release of the UK’s financial stability report and remarks from Bank of England Governor Mark Carney. The BOE’s Financial Policy Committee (FCP), which monitors the functionality of Britain’s financial system to ensure it can fulfill its responsibilities when markets are either smooth or rocky, publishes the financial stability report which evaluates the effects of possible adverse shocks to the banking system and economy in the UK. The report released today concluded that the UK financial system is “resilient” to the wide range of risks the country faces, including Brexit, and is strong enough to continue serving British households and business in the event economic shocks materialize.

By conducting a series of stress tests that assess the impact of a severe UK recession on growth, jobs and real estate, the FCP found that the 2018 stress test base-case scenario would see GDP falling 4.7 percent, unemployment increasing to 9.5 percent, housing prices to plummet 33 percent, and the sterling to drop 27 percent. However, despite the crippling weakness that the UK could face under a seriously adverse market condition, the report notes that the major UK banks have capital and liquidity sufficient to withstand severe adverse shocks to the economy, inclusive of a “disorderly” Brexit.

In an effort to reassure markets that the Bank of England is fully prepared regardless the Brexit outcome, Carney states in a press conference following the release of the financial stability report that the central bank has “contingency plans in place to support market functioning if necessary.” The BOE Governor continued saying that under scenarios where economic stresses materialize, the FCP stands pat ready to reduce the UK’s countercyclical capital buffer (CCyB). Currency at 1.00 percent, lowering the CCyB could free up to 250 billion pounds of liquidity and in turn increase bank lending capacity.

While the worst-case scenario under the FCP’s analysis, a disorderly Brexit, indicated that GDP could fall 10.7 percent lower, Carney elaborates that the estimated declines in output are attributable to supply shocks and would be a distinctively different environment from the economic slowdown experienced during the financial crisis. Moreover, in contrary to a recent poll by Bloomberg that states 55 percent of respondents see British Parliament rejecting PM Theresa May’s proposed Brexit deal, the BOE Governor states that he views a disorderly Brexit as unlikely. 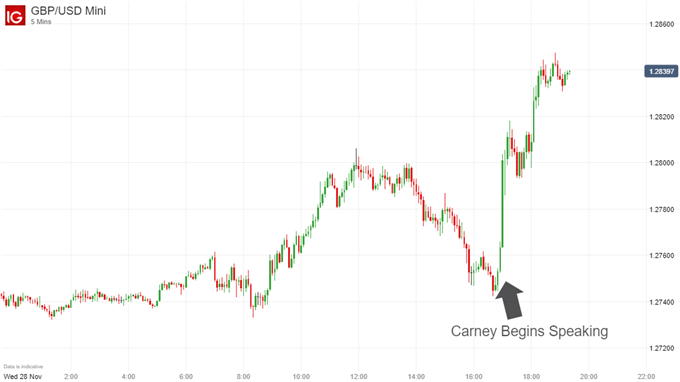 Following the news, the sterling jumped to an intraday high of 1.2847 GBP/USD. The rise could in part be credited to the Federal Reserve Chairman Jerome Powell’s dovish remarks which sent the dollar sliding and US equities higher. Looking forward, markets anxiously await word from British Parliament on their decision to approve PM May’s Brexit deal on December 10.