Yesterday’s bounce back has provided an opportunity for oil bears to reload shorts. The lack of conviction in the rise in oil prices suggests that any increase will be short-lived as markets look to find a floor. As we head to the G20 summit and OPEC meeting, it is likely that there will be increased talk regarding the size of production cuts to be announced for the December 6th OPEC meeting. However, with recent bearish reports surfacing yesterday, where Saudi Arabia are currently pumping oil at a record high of 11.1-11.3mbpd, a large cut to production would be needed to provide a modest lift in oil prices.

As a reminder, back in September, both Saudi Arabia and Russia agreed to boost production by 1mbpd in order to cool prices. As such, it is likely that a 1mbpd cut has to be the minimum level to be considered, as anything lower may extend to sell off in oil prices. Although, with Russia, Saudi Arabia and the US currently pumping oil at record levels, (34.4mbpd combined) a reduction of 1mbpd may not cut it, while anything significant is likely to be heavily criticized by President Trump.

Source: Reuters. Oil production from Russia, US and Saudi Arabia.

Given the near 30% plunge in oil prices, money managers have liquidated their long positioning, bringing net longs to the lowest level since September 2017. As net longs continue to remain relatively substantial, this poses a risk for further downside in oil prices. 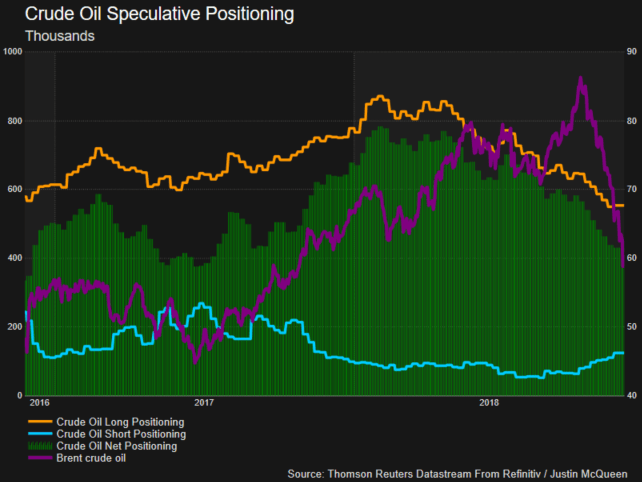 As the Relative Strength Index continues to hover in oversold territory, this suggests that an attempt of a rally has been sold into. Key support is situated at the $57.00 level, which roughly coincides with the 50% Fibonacci retracement of the 2016 low to 2018 high. The outlook for oil prices remains weak, with the oil curve remaining in contango. However, given the size of the sell-off at the backend of last week, the downside could be somewhat overdone.