China Reduces Holdings of US Treasuries for Fourth Consecutive Month

The US Department of the Treasury released Treasury International Capital (TIC) data Friday in which the flows for September were outlined. Total net TIC flows totaled -$29.1 billion versus the expected $108.2 billion. The majority of the outflows were observed in foreign official outflows which totaled $52.7 billion. Conversely, foreign private investors increased their holdings by $21 billion.

Long-term holdings, regarded as the more important metric, increased by $30.8 billion in the month of September. The figure falls short of the expected $62.7 billion and considerably lower than last month’s $131.8 billion. Part of the shortfall originates from reduced holdings by the two largest foreign holders, China and Japan. For the fourth consecutive month, China has reduced its holdings of US Treasuries.

Despite consecutive outflows from China, there is still insufficient evidence to suggest the move is a deliberate action in the trade war. Since May, the reduction amounts to $32 billion for China and $20 billion for Japan. While not insignificant sums, they pale in comparison to the totals held by each central bank. China holds $1.15 trillion, edging out Japan at $1.03 trillion for the top spot.

Learn to trade around news events like today’s monthly TIC data with our Introduction to Forex News Trading guide. 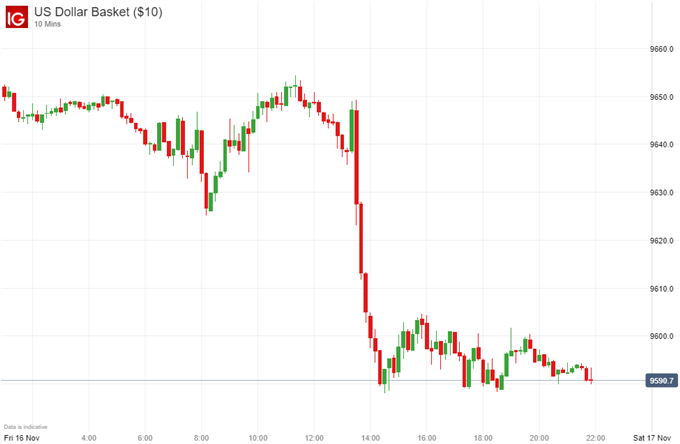 The monthly statement had minimal impact on the Dollar, largely due to its release time.

The Dollar was instead driven lower by dovish comments from Fed vice Chair Richard Clarida and Philadelphia Fed President Patrick Harker. In a statement Friday afternoon, Harker weighed on rate hike projections saying he is “not convinced a December rate hike is prudent.” The statements resulted in downward pressure on the Dollar basket. The collection of dovish comments will likely alter the fundamental landscape for the Dollar moving forward.