Things just got a whole lot worse for UK PM Theresa May after her Brexit minister, Dominic Raab, handed in his resignation. Raab said that he ‘cannot in good conscience support the terms proposed for our deal with the EU’. Raab pointedly added that ‘No democratic nation has ever signed up to be bound by such an extensive regime, imposed externally without any democratic control over the laws to be applied, nor the ability to decide to exit the arrangement’.

As we go to press Works and Pensions Secretary Esther MCVey has also resigned.

UK PM Theresa May is now under increasing pressure and may face a call to resign at any time. The influential Conservative 1922 Committee need to receive 48 letters of no confidence from Conservative MPs to spark a leadership contest, with many political commentators saying that only a couple of more votes are needed to trigger a contest. The PM is coming under attack from all political sides with her early mantra of ‘no deal is better than a bad deal’ being turned against her and her position is looking increasing untenable.

Dominic Raab’s resignation knocked Sterling sharply lower and back to levels last seen two weeks ago against the US dollar. Support at 1.2785 is now coming under pressure which would leave the way open to a fresh test of the recent 17-month low of 1.2662, made in mid-August. 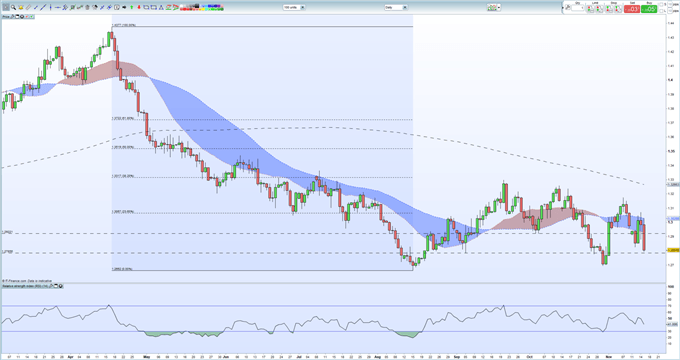 EURGBP has now broken out of its recent downtrend and changed its outlook from negative to neutral or even positive. The pair have cleared both the 20- and 50-day moving averages and are currently testing the 200-day ma and the 50% Fibonacci retracement at 0.88600.

GBPUSD trader data shows retail are 65.0% long – a bearish contrarian indicator – but recent daily and weekly changes give us a mixed trading bias.