The world’s largest shipping company revealed the US-China trade war is weighing on global shipping as container trade momentum slowed in the most recent quarter. AP Moller-Maersk highlighted the risks trade restrictions pose in their third quarter earnings reported released Wednesday. The Danish firm reported a beat on expectations but warned of considerable headwinds in the future which saw the shipping company’s shares trade lower.

See the DailyFX infographic “A Brief History of Trade Wars” for a visual history of the events that led to the US-China trade war.

At present, the company saw their container trade grow by 4.2% in Q3 2018 versus 5.8% a year prior. While growth figures remained healthy this quarter, Maersk officials forecast that global shipping could decline by up to 2% next year and in 2020. The company estimates that the current trade restrictions make up about 2.6% of the global value of traded goods.

The value of traded goods under restriction could increase dramatically if the United States decides to pursue further tariffs on China. Currently, the enacted tariffs range from 10% to 25% on $250 billion worth of goods. The Trump administration has threatened to bump up the tariffs to cover all US imports from China which would total more than $500 billion annually.

Similarly, the Trump administration recently investigated the plausibility of placing auto tariffs on the European Union. Any such action would warrant retribution and thus the value of traded goods under restriction could balloon rapidly, an undeniably bearish development for Maersk and global shipping in general. 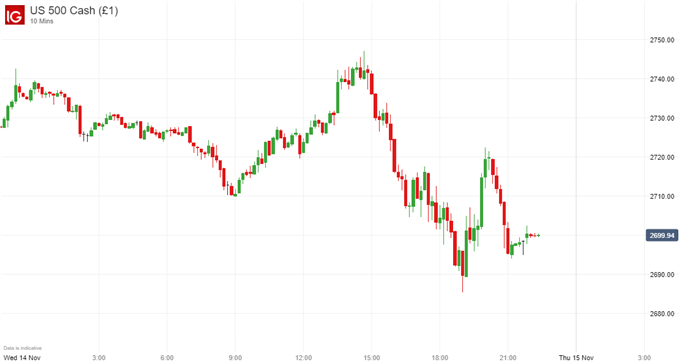 As for the bigger picture, tariff concerns continue to weigh on global markets. US equities fell under pressure Wednesday led lower by tech and financials. Officials will have the opportunity to reverse the course of trade talks later this month in Buenos Aires when President Trump and President Xi are scheduled to meet. However, it would be wise to avoid lofty expectations as multiple US officials have expressed concerns regarding progress.