After speaking with her Cabinet ministers on a one-to-one basis last night to try and persuade them to sign up to the new Brexit draft agreement. UK PM Theresa May will invite her Cabinet to vote on the deal this afternoon, with plenty of sceptics sitting around the table. If the deal is agreed, then it is likely that there will be an EU Council meeting next to update member states on the current state of Brexit before a potential EU27 meeting on November 24 - 25. After this the UK Parliament will vote on the agreement.

If UK PM May does not get this agreement passed, her political future is at stake. A leadership challenge will likely be launched by one of the staunch Brexiteers who would likely gather enough votes to win. This would then lead to an increased chance of a no-deal and the UK leaving the EU on WTO trade terms. If PM does not survive, Sterling will likely fall sharply.

Against this backdrop, Sterling remains edgy with 50+ pip swings on any political tweets or news flashes. The Brexit barometer, EURGBP, remains stable for now and still sits in a defined downtrend. If PM May gets approval this afternoon, EURGBP is expected to continue to decline with 0.86210 the initial downside target, while a negative response will see 0.8810 tested.

EURGBP will also be under downside pressure from this morning’s poor German Q3 GDP which saw the country contract further than expected – negative 0.2% against +0.5% in the prior quarter – while the annual reading fell to 1.1% against expectations of 1.3% and a prior reading of 2.0%.

And ahead, a raft of UK hard data prints including the latest look at inflation, retail prices and producer prices. Core UK inflation for October is expected to remain unchanged at 1.9%. 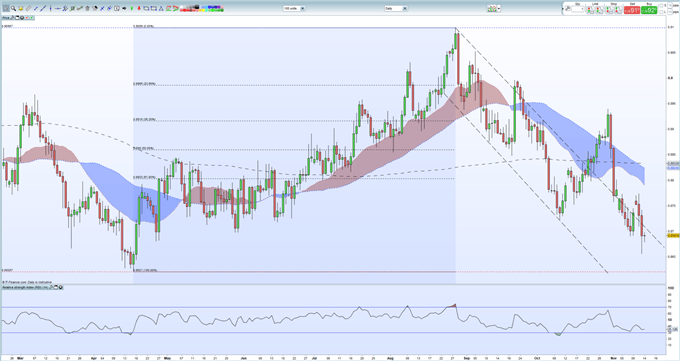