Asian stocks were lower across all the major bourses Friday, with investors reportedly worried that, with the US Midterm elections out of the way, the Trump White House will feel able to be more assertive again in its trade disputes with China.

The US Federal Reserve left interest rates alone, as expected. However, it also left the door to further rises wide open, and the markets still think it highly likely that a fourth rise this year will be seen in December. This could lead to more pressure on emerging market economies saddled with high Dollar debt.

The Nikkei 225 was down 0.9% in the middle of the Tokyo afternoon, with Australia’s ASX 200 down 0.4%. The Australian benchmark has bounced quite convincingly from October’s 2018 lows although its latest run higher has yet to convincingly top its most recent significant peak. 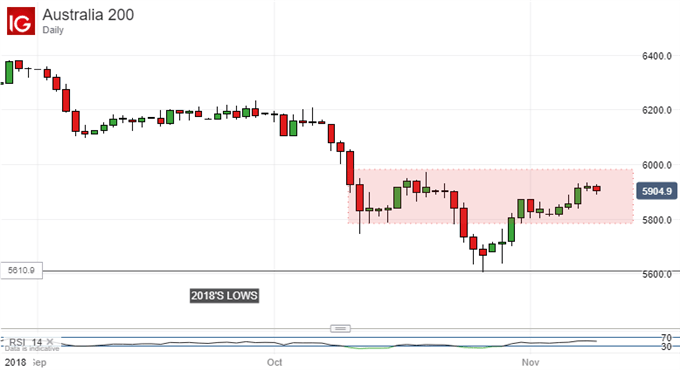 Chinese stocks were harder hit, with the Shanghai Composite down 1.2% and the Hang Seng off by more than 2%.The US Dollar was buoyed up initially by the Fed’s tone, with USD/JPY near five-week highs. However, the greenback slipped back a little as the session went on. The Reserve Bank of Australia’s monetary policy statement found central bankers perhaps a little more confident about economic growth despite inflation’s stubborn refusal to pick up.

There’s a British flavor to the day’s remaining economic data with official trade data due from the UK along with manufacturing and industrial production numbers. The US gets a look-in too though, with the University of Michigan’s consumer sentiment roundup on the slate, along with producer price index figures.