The Euro is enjoying a brief respite from the losses sustained against the US Dollar for the majority of this year. However, whether this upswing will continue or if it is corrective within a broader downtrend remains to be seen. Here’s what some of the DailyFX analysts think:

EUR/USD’s failure to test the August-low of 1.1301 may signal near-term bullish price action, according to Currency Analyst David Song. In addition, positive RSI divergence breaking out of a bearish formation in September may point towards a rally. A daily close above the 38.2% expansion at 1.1510 could indicate a return towards the Fibonacci overlap regions near 1.1640 to 1.1680, which are the 23.6% expansion and 50% retracement levels, respectively. 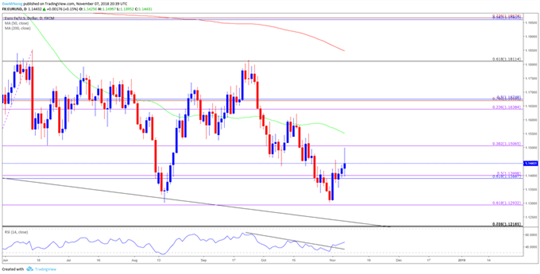 On the other hand, the currency pair could face a bearish reversal as it remains below prior October support levels ranging from 1.1488-1.1500. In addition, EUR/USD still maintains a descending trend line connecting swing-highs from late-September towards the middle of last month on a four-hour price chart. Currency Strategist James Stanley explains that this bearish behaviour, in addition to fundamental risk from EU negotiations regarding Italy’s budget and Brexit, may spell further losses for the Euro.

Looking ahead, EUR/USD eyes a packed docket of economic data over the next few weeks. The greenback could rise on the upcoming FOMC rate decision and forward guidance, in addition to preliminary consumer sentiment for the month of November. Meanwhile, the Euro may face volatility from the release of local 3Q GDP and employment figures, but will be more interested in developments in ongoing Brexit negotiations between the United Kingdom and the European Union, as well as the Italian budget crisis.