See our quarterly NZD forecast to learn what will drive prices through mid-year!

The Reserve Bank of New Zealand will publish its final monetary policy statement of the year at 2000GMT where the central bank is expected to maintain the OCR rate at 1.75%. OIS (Overnight Index Swaps) have more or less fully priced in an unchanged rate decision. Consequently, focus will be on the monetary policy statement and whether the Governor Orr may provide a more balanced approach, relative to his dovish tilt in the August MPS.

Since the last RBNZ rate decision (Sep 27th), economic data has been broadly mixed, although the central bank will likely take pleasure in the fact that inflation for Q3 moved closer to the mid-point of their 1-3% range, while the latest jobs data had also surprised to the upside. Although, with a closer inspection of the recent data, headline inflation jumped on the back of a falling exchange rate and rising fuel prices, while the central bank’s preferred inflation model (Sectoral Sector) remained at 1.7%. Alongside this, the latest jobs report highlighted that wage growth remains subdued. However, an acknowledgment by the RBNZ of improving could provide a lift for the NZD as markets reign in bets of a rate cut.

Given that market pricing is fully priced in for an unchanged rate decision, the focus will be on the monetary policy report. In light of recent encouraging data, the RBNZ may adopt a more positive outlook and a less dovish rhetoric relative to comments made in August. It is unlikely that the RBNZ will alter its rate guidance (“the next move in the OCR could be up or down). Although, they may rethink their OCR forecast by bringing forecast expectations of a rate rise (current seeing a rise by September 2020). As such, with NZD short positioning hovering around the highs of the year at 2.296bln, the currency is vulnerable from a further short squeeze.

Option Pricing suggests that we could see some modest volatility over the event with vols indicating a break-even of 52pips. 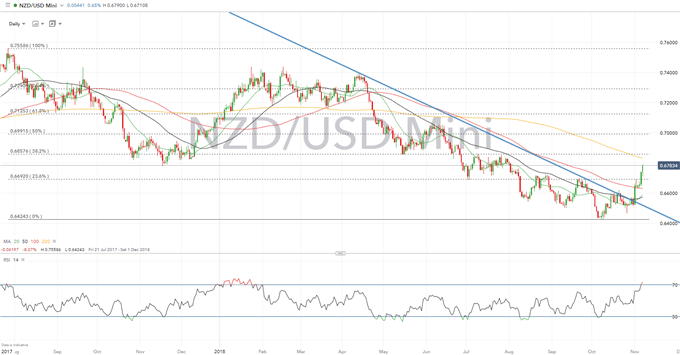 Following the breakout from the descending trendline, NZDUSD has continued to saw. However, resistance on the upside at 0.6830 (200DMA) and 0.6850 (38.2% Fibonacci Retracement) may see gains in the pair begin to top out, particularly given the size of the gains in the short time period.

IG CLIENT POSITIONING AHEAD OF RBNZ

We typically take a contrarian view to crowd sentiment, and the fact traders are net-long suggests NZDUSD prices may continue to fall. Positioning is more net-long than yesterday but less net-long from last week. The combination of current sentiment and recent changes gives us a further mixed NZDUSD trading bias.