Asian stocks traded higher almost across the board on Wednesday as US Midterm election results filtered in.

News channels have called the House of Representatives for the Democrats, with the Republicans still expected to hold on in the Senate. Such a result would presumably increase the chance of legislative pitfalls for the Trump administration, but stock markets gained nevertheless, as their Wall Street counterparts had on Friday.

Such an electoral outcome is not expected to undo tax cuts or curb efforts to reduce business regulation- things stock investors have broadly praised. However, it probably won’t do much for the current trade impasse with China either, and a stronger Democratic showing in Congress is likely to mean more pressure for investigations into the various controversial aspects of the current White House.

Still, stocks seemed to take the result in their stride. The Nikkei 225 had added 0.4% by the middle of the Tokyo afternoon. Shanghai was up by 0.3% with the Hang Seng up 0.7%. Sydney’s ASX 200 climbed 0.4% with Seoul’s Kospi the standout loser. It was off by a similar amount.

The Nikkei remains just about in the daily-chart uptrend that began in late October. However it has so far failed to top its previous significant high, and appears to be losing a little steam. 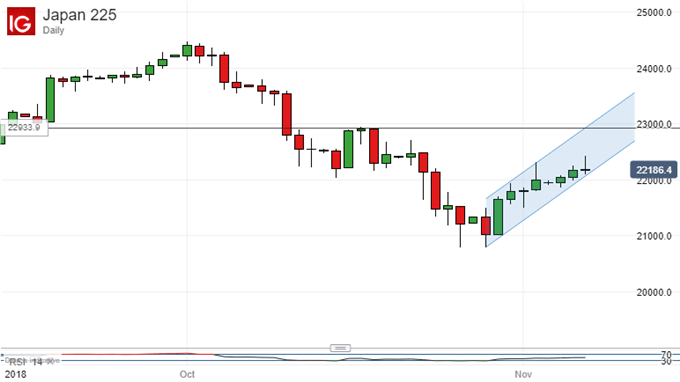 A daily close below that channel base will put all recent progress in doubt and may return focus to the October low of 20,740.

The US Dollar was a little twitchy against major traded rivals but didn’t move far either way in Asian hours as the Midterm results came out. It seems set to end the local session a little lower, but not by much. Against both the Euro and the Japanese Yen the Dollar is more or less where it started on Monday, despite some whipsaw action through the Asian morning.

The Federal Reserve will give its November monetary policy verdict on Thursday but no move is likely so close to major elections, even were the Fed minded to make one. December is still seen as the most apposite time for another rate rise.

Crude oil prices were a little weaker, reportedly on investor concerns that the market is now adequately supplied. Gold prices edged up as the Dollar slipped.