Euro at Risk as Italy Teeters on Weak Growth, Budget Clash with EU

Check out our Q4 forecasts to learn what will drive key asset price movements through year-end!

Italy’s controversial budget proposal has significantly contributed to an already risk-averse environment and exerted further downward pressure on the Euro. It has also led to the progressively widening spread between Italian and German 10-year bond yields. This reflects the added return that investors are demanding for what they believe to be the increasing risk of lending to Rome versus Berlin. 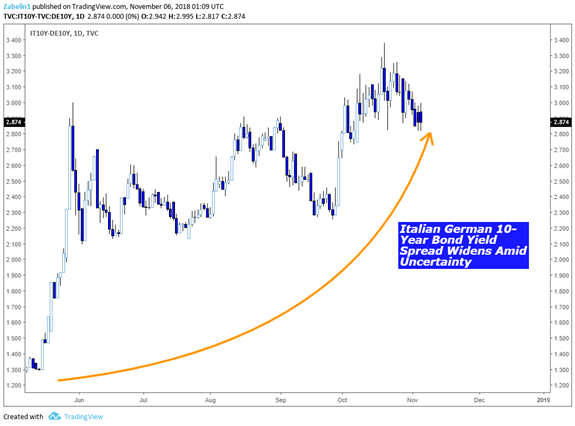 After the EU Commission rejected the Italian government’s budget proposal, they were asked to resubmit another draft by November 13.

Prime Minister Guiseppe Conte has famously stated that there is “no plan B”, and the Italian government will not alter its fiscal stance. The tension between Rome and Brussels has been building for months and is not likely to fizzle out anytime soon as the Commission sharpens its teeth.

If the government fails to implement substantive changes to their budget proposal, the EU officials have considered the possibility of publishing a report on Italy’s compliance with the regional bloc’s fiscal rules on November 21st. This was originally planned for the spring, and is likely intended to exert pressure.

If the report finds Italy in violation of EU norms, it could trigger what is known as the “excessive deficit procedure” and may result in sanctions. That would entail a financial penalty of 0.2% of the Italy’s economic output. This may push the already battered economy closer to the precipice of default.

This comes on top of last week’s disappointing data from the Euro-Area and Italy. The region’s economy added 0.2% in the third quarter, falling short of the median estimate of 0.4%. Consumer confidence also took a hit, and a general pessimism around Europe’s future was further exacerbated when German Chancellor Angela Merkel announced she would not run for re-election in 2021.

Italian manufacturing substantially shrunk and economic growth stalled in the three months to September, undershooting estimates of 0.2% increase. The poor performance from these benchmark economic indicators is concerning investors who are skeptical of the government’s ability to push through a bold fiscal agenda. The Euro is likely to continue suffering from the growing uncertainty and tension between Brussels and Rome. 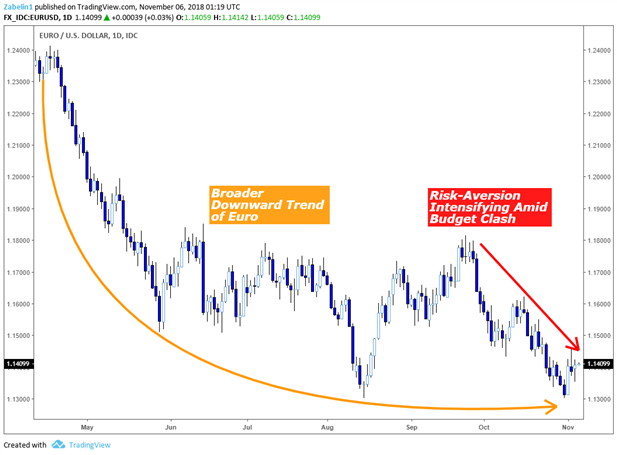