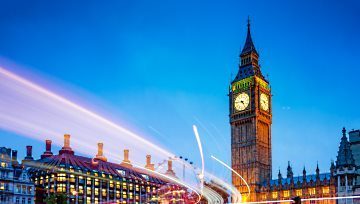 Most Asian Stocks Up, Brexit Latest May Extend FTSE 100 Gains Next

Most Asia Pacific benchmark stock indexes began November on an upbeat, echoing relief gains seen on Wall Street following a very shaky October. Some of the most pronounced performance were seen in China where the Shanghai Composite rallied over one percent as it headed for a third day of gains. Confirming this would mean its best winning streak in over two months.

Investors may have been attracted by plans from China’s government to provide a stimulus package after economic growth slowed to almost a decade low. Elsewhere, South Korea’s KOSPI fared rather well with gains reaching about 0.65%. Meanwhile Australia’s ASX 200 was only little changed as we approached Thursday’s close. Japan’s Nikkei 225 fell about 0.54%, weighed down by communication services and health care.

Looking at FX, not surprisingly the pro-risk Australian Dollar was up across the board on Chinese stimulus hopes. It has Australia’s key trading relationship with the world’s second largest economy to thank. Furthermore, better-than-expected local trade data showed that exports to China remained robust. We also saw impressive performance in the relatively high-yielding New Zealand Dollar in ‘risk on’ trade.

Together, this boded ill for the US Dollar as demand for a safe haven waned. In addition, the anti-risk Japanese yen suffered as well. The British Pound on the other hand outperformed thanks to a report from the Times that UK Prime Minister Theresa May secured a deal with the EU on financial services. This added fuel to Sterling’s upside momentum which was already ignited by positive Brexit news during the US trading session.

As European markets come online, this may allow regional traders to absorb the recent positive Brexit updates, perhaps sending the FTSE 100 higher. S&P 500 futures are also pointing cautiously higher, hinting that the upbeat mood in financial markets may continue. In such a case, AUD/USD still faces a key resistance barrier which if cleared, may open the door to test the descending February trend line.

The FTSE 100 has pushed above a near-term descending resistance line after positive RSI divergence warned that downside momentum was ebbing. It has set itself up to test a horizontal barrier between 7,248 – 7,266 which has in the past acted as both support and resistance. Clearing that would eventually have the index testing a descending trend line from August. A turnaround has support eyed at 6,928 before exposing the March 26th low around 6,866. 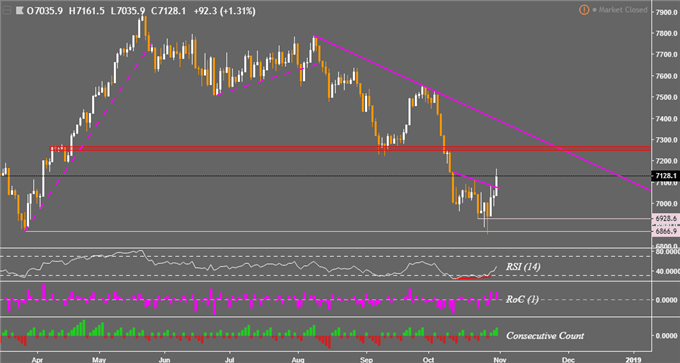